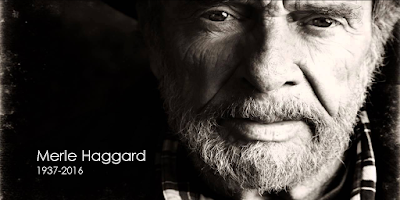 I'm not especially knowledgeable about the country music scene, but I can't recall a time when I wasn't aware of who Merle Haggard was. I knew he was a country singer, and I knew he was a genuine original. I knew that he'd known more than his fair share of trouble and then some, and that he'd overcome more problems than most of us will ever know. And I knew that despite all of this, he managed to put together a life and career marked by decency, fair play and respect.

Born near Bakersfield, California in 1937, Haggard lost his father at a young age, which knocked him off course pretty quickly. As a teenager, he was in and out of jail repeatedly and initially showed few signs that he'd learned anything from these experiences. Moreover, he didn't seem to have any real idea of what he wanted to do with his life. But then he discovered country music, which he liked and was good at, so for the next several years at least there was something to compete with the worser angels of his personality and keep him on the straight and narrow sometimes.
Too soon, however, he found himself behind bars again. Sentenced to prison, Haggard organized a gambling ring and tried to escape, but his effort fell short. Frustrated by the course his life was Taking, Haggard began to reflect on his options. Soon, he began taking GED courses and flirted with the idea of joining the prison band. He attributes his ultimate decision to straighten himself up to a concert he attended on New Year's Day of 1959 featuring Johnny Cash. The rest, as they say, is history.

Haggard had a remarkable career and became one of the most successful country music performers of all time.

During his long career, Haggard received numerous awards from the Academy of Country Music, Country Music Association, and National Academy of Recording Arts and Sciences (the Grammy Awards). He was inducted into the Nashville Songwriters Hall of Fame in 1977, the Country Music Hall of Fame and Museum in 1994, and the Oklahoma Music Hall of Fame in 1997 In 2006, he received a Grammy Lifetime Achievement Award, and was also honored as a BMI Icon at the 54th annual BMI Pop Awards that same year. During his songwriting career up to that time, Haggard had earned 48 BMI Country Awards, nine BMI Pop Awards, a BMI R&B Award, and 16 BMI "Million-Air" awards, all from a catalog of songs that added up to over 25 million performances.

In later years, he became known for his progressive political positions, and, in particular, his stalwart support of President Obama. I really enjoyed his visit to liberal comedian Bill Maher's show Real Time in 2016, where he talked about his political philosophy . . . and the time Hillary Clinton visited with a group of musicians on Willie Nelson's bus:

"Santa Claus and Popcorn" was written by Haggard himself and first released in 1973 on the LP "Merle Haggard's Christmas Present," which made it all the way to #4 on Billboard's Hot 200 Albums chart. The song was later included on several subsequent Haggard holiday albums, including 1978's "Goin' Home for Christmas" and "A Country Christmas with Merle Haggard," released in 1992. This isn't the first time I've featured a Merle Haggard tune on one of holiday mixes. My 2008 mix "Home for the Holidays" featured Haggard's song "If We Make it Through December," which was an especially fitting tune considering the state the country was in at the time.

Track 22
Holiday Thoughts, by President Jimmy Carter (1979)
Track 22 is an excerpt from a statement made by President Jimmy Carter in 1979, just under two months into the Iranian Hostage Crisis. For those who don't recall that particular Christmas season, it was a difficult time. In early November, a group of Iranian students stormed the U.S. Embassy in Tehran and took 52 of the American employees there hostage. Earlier that year, the people of Iran had overthrown the government of Shah Mohammad Reza Pahlavi, a U.S.-backed tyrant who had subsequently fled to the United States, where he was being treated for lymphoma. Many in Iran wanted the U.S. government to return the Shah to Tehran to stand trial for his crimes, but the Carter administration opposed that request. The students who ultimately seized the embassy originally planned to remain there for no more than an hour or two, but popular reaction to their occupation was strongly favorable and they had the full support of Ayatollah Ruhollah Khomeini, so it continued throughout the whole of 1980 and into the start of the administration of Carter's successor, Ronald Reagan.

To symbolize the plight of the American hostages and the sad mood of the country, President Carter decided that the national Christmas tree should be lit by no more than a single star until our hostages were safely returned. Eventually, they did return home. But the crisis played a major role in the unraveling of the Carter presidency and served as the prologue to our current era of hostility with the Arab world.This clip harkens back to that difficult time. It also spotlights our 39th president, whose administration will likely never achieve the respect that Carter's post-presidential achievements appear to have earned.

Track 21
We're Getting Pa a Brand New Still for Christmas, Little Lou and Her Country Folk (1956)
This one's rather rare, and the reason I know is that just searched on Google for five words from the song's title in quotation marks and came up with exactly three matches. That's very unusual. And so, of course, is the song:

Fourteen left to look at before we're done. It's unlikely we'll finish the lot of them by the time Santa arrives, but we'll try. If we have to finish things up within a few days of the 25th, that shouldn't be too problematic I hope. So long for now!
Posted by Mark J in LA at 9:50 PM