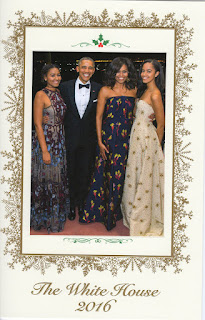 As a history buff and avid reader about all things presidential, I'm always interested in seeing the White House Christmas card each year. Well, President Obama and his family released their 2016 holiday card last week, and naturally it's become the subject of a lot of discussion. Why? Because it features a family picture rather than a more general depiction of the White House in winter.

It is believed that President Calvin Coolidge was the first president to commission a holiday card back in 1927. Since then, there's been an official White House card every year. The styles vary widely, of course depending on a host of factors. Interestingly enough, the Obamas are on the third presidential family to feature a picture of themselves on the card. President and Mrs. Franklin Roosevelt featured family pictures at least half a dozen times. Oddly enough, while the Roosevelts typically signed their cards as "The President and Mrs. Roosevelt," there were two years (1936 and 1941) in which the White House card came from "Mrs. Franklin Delano Roosevelt," with no mention of the President at all.

The only other White House card to feature a picture of the current occupants was the first card sent by President and Mrs. Hillary Clinton in 1993. Truth be told, it wasn't a particularly good picture of the Clintons, although it certainly looked better than any of the grim portraits of the Roosevelts. But it can't hold a candle to the photograph on this year's card, which captures the class, grace and poise the current First Family brought to the White House.


"As our family reflects on our many happy years spent in the White House, we are grateful for the friends we've made, the joy we've shared, and the gifts of kindness we've received.

"We wish you and your loved ones a joyous holiday season and a wonderful new year."

I've got a feeling that the new year's going to become mighty horrifying real quick beginning on Inauguration Day.

See the Official White House Christmas Cards of the 15 Most Recent Presidents
Posted by Mark J in LA at 6:52 PM