Here we come with notes on four more of this year's tracks, including the second of the 12 songs on this year's mix that pay homage to one of the many entertainers we lost during 2017. Since we first started recognizing recently departed entertainers in this way several years ago the list of recent deaths has grown longer with each passing year, and this year's list includes some real superstars and trailblazers. Here are the next four tracks:

Track 16
It's Christmas Time Again, by Harley Poe (2006)
I ran across this little gem on an EP from several years ago called "A Very Standard Christmas," which featured holiday tunes from artists on the Standard Recording Records label. It's by a group named Harley Poe, which has been described as a "[h]orror infused folk punk act out of Kokomo, Indiana." With a rap like that, you just know these guys have got to be infused with the Christmas spirit, right? The band was formed by the former lead singer of Calibretto 13, a "Christian surf punk band" (I kid you not), only I'm told that Harley Poe dropped the Christian angle. Another blogger describes the act this way:


Horror-folk artist Harley Poe is one of the fright scene’s best-kept secrets. He’s kinda like Voltaire, but less pretentious and actually funny. This is probably the best “Santa as a serial killer” song ever. Sleigh bells and jangly guitars back a stern warning about making Santa’s acquaintance on Christmas. You don’t want to find out what’s in his sack!


Any wonder why I chose to make this cut the title track of this year's mix?

Track 14
Christmas All Over Again, Tom Petty and the Heartbreakers (1992) 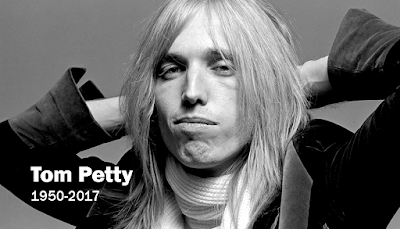 The death of Tom Petty on October 2 was unexpected and profoundly sad, as he was, in many ways at the top of his game and widely recognized as among the most successful musicians in rock history. He had spent the previous six months on a nationwide tour with his longtime band the Heartbreakers, finishing it up with a hugely successful performance at the Hollywood Bowl exactly one week before his death. Between his work with the Heartbreakers and the Traveling Wilburys and as a solo performer, Petty sold close to 90 million records, and he was inducted into the Rock and Roll Hall of Fame in 2001. I had a couple of different shows at my college radio station in Baltimore and I prominently featured Petty's music on each of them. Starting with "Breakdown" in 1977, "I Need to Know" the following year, the album "Damn the Torpedoes" in 1979 and 1981's "Hard Promises," there was always a Tom Petty record within easy reach of my turntable.


Track 13
The Best Santy Claus I Ever Heard, Andy Griffith and Don Knotts (1960)
As I noted five years ago, The Andy Griffith Show has always been one of my very favorite programs. I ran across this brief clip several years ago on the wonderful Check the Cool Wax blog and adding it to the mix was an easy call. I could be way off on this, but I think including short little bits like this between songs not only helps to break things up but also seems to pick up the pace of the whole CD, thereby making for a more upbeat feel. If you don't believe me, search for any of the classic Check the Cool Wax mixes, many of which are relatively easy to find via Google. Unfortunately, I've only just now noticed that the blog seems to have stopped in its tracks in early 2015 and I've been unable to locate any explanation anywhere. I'm hoping there's some good explanation for this -- like maybe the blog switched to a different hosting service? The blog's author who goes by the name Brainwerk is obviously a very talented entertainer who's responsible for a lot of smiles and laughter -- not just during the holiday season but throughout the year. I hope all's well.

This clip comes from Season 1 Episode 11, of The Andy Griffith Show, "The Christmas Story," and it's a classic. It's also the only Christmas-themed show in the entire series. While many episodes of this series are apparently in the public domain and therefore freely available online, this one isn/t. The only version I could come across is available HERE, but it comes in a pretty creepy format. See if you can block the woman watching with you from your mind while you watch. I know I couldn't.