I’ve been providing a bit of background about each of the 38 tracks on my latest holiday mix, which is titled Here Comes Santa Claus. Here’s some information on two more tracks: 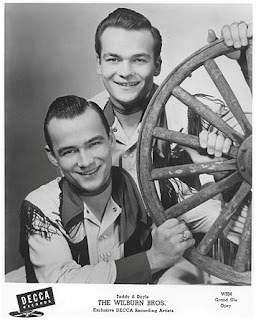 Doyle and Teddy Wilburn were a popular country music act from Hardy, Arkansas, who performed and recorded together for more than 30 years – first as The Wilburn Children, and later as The Wilburn Brothers. They were discovered by country legend Roy Acuff, who arranged for them to perform at the Grand Ole Opry, but while their act was well-received, they were forced to stop performing after about six months due to federal child labor laws. Both brothers served in the U.S. Army in Korea, after which they signed with Decca Records and had a string of modest hits with such numbers as “Go Away with Me” and “Trouble’s Back in Town.” Tag Along was recorded in the early 1960s and released as a special holiday single several different times. It tells the story of Santa’s watchdog, Tag Along, who travels with Santa each Christmas Eve to guard the sleigh while Santa goes indoors with the presents. It’s apparently a prestigious assignment. Both Rin Tin Tin and Lassie sought the position unsuccessfully. But it’s no easy job, as the song makes clear. The Wilburn Brothers continued recording into the 1970s, by which time they were putting the bulk of their energies into talent management. They were instrumental in launching the careers of a number of popular country stars, including Loretta Lynn, and they also hosted their own syndicated TV variety show, The Wilburn Brothers Show, which ran from 1963 to 1974. Despite their successful careers as performers and businessmen, the two brothers will also be remembered as the singers who gave away their chance to record “Heartbreak Hotel” before Elvis Presley. In 1956, they decided against recording the song, which they described as “strange and almost morbid.” When you stop to consider that assessment for a moment, it’s pretty tough to argue the point.

Track 23
Rudolph the Red-Nosed Reindeer, by Shakespeare Man (1993)
Thirty years after the release of Tag Along, Kevin Ryder and Gene "Bean" Baxter, better known as Kevin and Bean, hosts of the morning show on KROQ-FM, released a lovely album called “A Family Christmas in Your Ass,” which is where I found Shakespeare Man’s rendition of Rudolph, the Red-Nosed Reindeer. Kevin and Bean have handled the morning duties for KROQ-FM since 1990, and their show is also syndicated in a number of other markets. The “Family Christmas” album is just one in a series of similar holiday releases that were sold to benefit local charities. It mimics their morning radio show in that it offers a mix of music and comedy bits designed to appeal to adolescents and those with adolescent sensibilities. But, hey, it’s for charity, and people like me deserve to be entertained, too, right?
Posted by Mark J in LA at 9:02 PM