Christmas may indeed be over but we're only about half-way through the tracklist of my latest CD, "It's Christmas Time Again." Here are some observations on a few more tracks.

Track 23
Spending Christmas with the Blues, by Floyd Miles and Gregg Allman (1996) 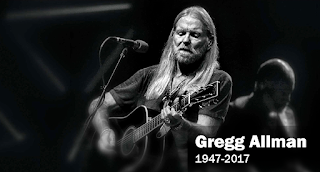 Gregg Allman's life was rarely easy. Born in Nashville to a family of modest means, his father was shot and killed by a hitchhiker when Gregg was only two years old. His mother eventually put Gregg and his older brother, Duane, in a military academy in order to attend college and become a CPA. Gregg interpreted his mother's decision as a sign that she didn't love him, and he found the school to be incredibly difficult and unpleasant. Fortunately, Duane watched out for him and the two forged a tight bond that eventually expanded into a shared love of music. They founded the Allman Brothers Band in 1969, but just two years later, as they first began to experience real success, Duane was killed in a motorcycle accident. Raised in these circumstances, it's easy to imagine how Gregg developed an affinity for the blues.


Music is my life's blood. I love music, I love to play good music, and I love to play music for people who appreciate it. And when it's all said and done, I'll go to my grave and my brother will greet me, saying, "Nice work, little brother—you did all right." I must have said this a million times, but if I died today, I have had me a blast.

Track 22
What Lucy Really Wants for Christmas, by the Cast of Peanuts (1965)
If you grew up in the '60s, chances are you spent at least several nights in front of your TV each year during the lead-up to Christmas watching a litany of hard-to-forget holiday cartoon specials -- broadcasts that were as much a part of the Christmas holiday season as your Christmas stocking and the family advent calendar. You know the ones I'm talking about here -- they were on every year, you never missed a one of them, and they each featured a song or two that you can still sing today as easily as "Silent Night" or "Joy to the World." There was "Rudolph the Red-Nosed Reindeer" (1964), "How the Grinch Stole Christmas" (1966),  "The Little Drummer Boy" (1968), "Frosty the Snowman" (1969), and perhaps the most beloved of them all, "A Charlie Brown Christmas" (1965). That's the broadcast this very short clip was taken from, and it remains a great favorite of mine to this day.

If you don't already own your own copy of this holiday classic, I recommend that you buy the 50th Anniversary Deluxe edition from amazon.com today, It's now available for less than ten bucks and it includes a feature titled "A Christmas Miracle: The Making of a Charlie Brown Christmas," which I found to be entertaining and chock full of interesting details.


You know, I think it's true when they say that once you start to lower your standards it becomes easier and easier to continue in that same downward direction. Once I decided to let some adult content sneak through the back door in the form of the Drive-By Truckers' "Mrs. Claus's Kimono" it didn't seem like such a big deal to look the other way when this sexy little number climbed in through a basement window. At first listen, it's a pretty little tune about a young woman's hospitality as she offers a brief respite to Santa during his big package delivery runs every December. But upon closer inspection of the lyrics, the truth emerges. The plain truth is that while the tune may be pleasing, the lyrics are downright nasty! The only package this woman cares about is the one Santa carries back with him to the North Pole each year -- you know, the one most of us thought only Mrs. Claus was familiar with.

I couldn't resist including this song in the mix -- not so much because of the naughty element, although that was surely a factor -- but rather because the song was written and performed by Sarah Taylor and Bill Mumy. If Mumy's name sounds familiar to you I'm not surprised. He was the star of one of my favorite TV shows growing up -- the '60s classic "Lost in Space," on which he played the pre-teen astronaut Will Robinson. He also played young Anthony Fremont in "It's a Good Life," one of the most memorable episodes of another cult classic, "The Twilight Zone." But in recent years, Mumy's been more of a musician than an actor, and once the kids are in bed, this isn't such a bad little song to stick on the Victrola. Give it a listen HERE.

Listen to Bill Mumy Discuss His "Lost in Space" Castmates

The Maccabeats have done it again! Several years ago, this Orthodox Jewish a cappella group hit it big with the Hanukkah-themed "Candlelight," which was a take-off on the the Taio Cruz smash hit "Dynamite." This year, they've turned the score of the biggest Broadway show in years into yet another catchy celebration of December's most popular eight-night holiday. As with "Candlelight," "Hasmonean" is more than merely entertaining. There's a solid history lesson here, too – along with a heavy dose of the kind of special energy that's made Lynn Manuel Miranda's "Hamilton" such a runaway success.

We'll be back with additional commentary sometime soon.
Posted by Mark J in LA at 11:56 PM No comments: