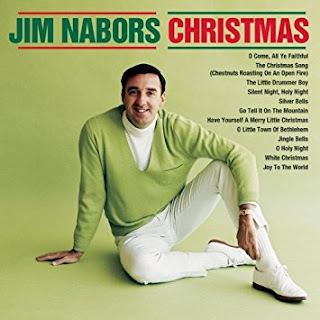 I was terribly saddened to learn of Jim Nabors' death this evening. Best known for his portrayal of North Carolinian auto mechanic and Marine private Gomer Pyle on The Andy Griffith Show and, later, Gomer Pyle, USMC, Nabors was also a successful singer and recording artists who produced a number of best-selling Christmas-themed albums in addition to a range of popular releases.

In 2013, shortly after same-sex marriage was legalized in Washington state, Nabors married his longtime partner Stan Cadwallader at the Fairmont Olympic Hotel in Seattle. Following the announcement of his death earlier today, Karen Pence, the wife of Vice President and former Indiana Governor Mike Pence, issued a statement mourning the loss.

"So sad to hear about the passing of Jim Nabors," she wrote. "We heard him sing 'Back Home Again in Indiana' at the Indianapolis 500 countless times. We will miss his beautiful voice."
Posted by Mark J in LA at 8:27 PM No comments:

A warm season's greetings to you and yours -- or, better yet, as our esteemed former President and his fellow travelers frequently exclaimed during what must currently be described as the Golden Era of American Democracy:  "Merry Christmas!" It's great have you with us as we throw a couple of logs on the fire and begin to string up the festive holiday lights for another year. It's always nice to see the warm faces of good friends during the holidays, even as we remember those we've lost during this most discouraging of years.

I want to start with a heartfelt apology to anyone who's looked this way in vain for news about my latest holiday CD, as I'm at least several weeks late in opening up the store this year. The truth is that until last Sunday I wasn't planning to open up at all. I've been exceedingly busy the past couple of months and expect that to continue for the next couple of months or more, and I've been finding it difficult to scare up the old Christmas spirit of late. Moreover, for the first time ever I've been having trouble finding the kind of material I like to use in my annual compilations. The combination of these various factors led me to regretfully conclude that I wouldn't be able to create a Christmas mix this year.

Toward the end of the recent Thanksgiving weekend, however -- right around 2:00 on Sunday afternoon -- I was overcome by feelings of guilt and inspiration in roughly equal measure and found myself starting to poke around in my files to see whether there was anything there I might be able to use. Perhaps I could throw together an EP, I thought. Even a few tracks would be better than nothing.

Well, within an hour or so I started to feel some of the old magic returning, and before I knew it I'd assembled the rough outline of another full CD. While it usually takes me a month or more to assemble each annual mix, I actually created this year's mix in a single, albeit extremely late evening and I'm pleased to report that my 2017 mix, titled "It's Christmas Time Again" is now complete and ready to go! 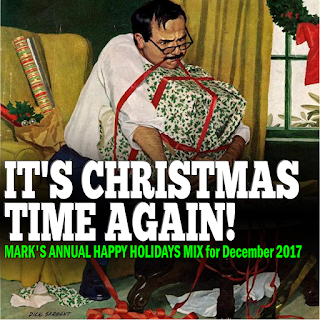 Over the next several weeks I will try to follow the model I've used in previous seasons -- that is offering a few words about each of the tracks included on this year's CD. There are 34 tracks in all, so I'll be lucky to finish the project in time for Santa's arrival on Christmas Eve. But I'm going to try, even if I have to cheat a little bit and clean up a post or two after the fact.

I'll be on the road sporadically throughout these next several weeks -- tonight I'm in Exton, Pennsylvania, where it's drizzling and in the upper 40s. Today's news brought little cheer or solace as our nation's elected leader retweeted a series of anti-Muslim videos and continued to promote legislation that would slash the taxes of many of our wealthiest citizens at the expense of million of middle class and working Americans who are going to have trouble buying holiday gifts this year. Several more once-respected public figures have been exposed as sexual predators, and North Korea has successfully launched another intercontinental missile test. And to top it off, another beloved celebrity has died. Against that background, I'm mighty glad to have something nice to throw into the mix. There's an awful lot of good still out there. I'm hoping we can salvage something better from this year's holidays and begin to set things on a better and more uplifting course -- after all, whatever else is going on, It's Christmas Time Again!
Posted by Mark J in LA at 7:47 PM No comments: