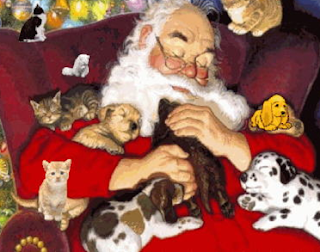 With another holiday season now safely behind us, and a very important presidential election season beginning tomorrow night in Iowa, this blog will now begin a long winter's nap. I may post an occasional item now and then over the next ten or eleven months, but I don't plan to add very much until sometime in November, by which time my 2012 holiday CD should be at least partially completed. I want to thank those other holiday music enthusiasts whose websites and blogs have introduced me to music and artists that were unfamiliar to me, and whose enthusiasm and holiday spirit have proven to be extremely contagious. I've listed some of my favorite holiday music blogs in the right-hand column, and there are dozens of similar blogs that I've also enjoyed over the past several years. They can serve as a good antidote to the contentiousness and rancor that seem to have infected our politics and public debate. Best wishes to all for a happy and healthy 2012, and let's hope we can restore some measure of goodwill, honesty and civility to our political system during this upcoming campaign. As Bruce Springsteen reminds us, "Nobody wins unless everybody wins." So long, for now!
Posted by Mark J in LA at 2:00 PM No comments:

I've never been a big one for making New Year's Resolutions, although I've made them in the past and actually stuck with a few for awhile. Resolutions for positive change are noble initiatives whenever they're made, and I remain optimistic about our ability as human beings to adopt new and better ways of behavior. I've heard somewhere that once you manage to do or stop doing something for at least 21 days, it's likely that the change will stick. In that spirit, here's a list of resolutions from someone I've long admired, author, songwriter and populist gadfly Woody Guthrie. Feel free to adopt whichever ones you consider to be most appropriate for you:

And then there's that very different (and, frankly, horrifying) set of resolutions from the late Mae West, available for your New Year's Day enjoyment HERE.
Posted by Mark J in LA at 2:51 PM No comments:

I'm not sure when this started, but for at least the past dozen years the Science Fiction cable channel has broadcast a two-day marathon featuring episodes of the classic TV program The Twilight Zone beginning on the morning of December 31 and continuing through New Year's Day. I've always liked The Twilight Zone, and I'm pretty sure I've managed to catch at least a couple of episodes every year since I first learned about these marathons. It's the only time I ever watch the Science Fiction channel, and one of the few times I watch anything on live television anymore. Created by writer Rod Serling, The Twilight Zone tends to feature stories with an underlying message or moral. Most of the these messages are humanistic in nature and champion "the little guy" against oppressive government or societal institutions. I think that's why I like the show so much -- that, and the unexpected and sometimes terrifying plot twists that typically leave the viewer with an awful lot to ponder. Not a bad way to start the new year.

I've only seen two episodes so far this year, but I'm posting a third episode -- perhaps my favorite one ever -- below. It's called "Night of the Meek," starring Art Carney as a department store Santa who, after being fired for reporting to work drunk, manages to find a much better gig.  Now presented, for your consideration:

Incidentally, this isn't the only time Art Carney played Santa Claus. He put on a slightly better beard and Santa suit to reprise the role in The Night They Saved Christmas, a 1984 movie featuring the late great Mason Adams as a determined executive whose plan to drill for oil at the North Pole threatens Santa's workshop. Carney is also responsible for a tune I've been hoping to use on my last few holiday CDs and may well use next time. It's a spoken word record in which Carney recites the classic poem "Twas the Night Before Christmas," in syncopation against the jazzy backdrop of a single drummer's beat. You can hear it HERE.
Posted by Mark J in LA at 1:12 PM No comments:

It's now 2012 . . . and Happy New Year to all! I'm hoping you saw the new year begin in a way that was special to you, but I'm willing to guess that your celebration wasn't quite as -- ah, "bombastic" -- as this one from the world's tallest building in Dubai:

Not to worry, folks. I understand the building's largely empty and its owners are effectively bankrupt. Let's make 2012 the year in which substance becomes more important than meaningless style and overindulgent bravado. (But it sure looks neat, don't it?)

Here's how things looked in London:


Here's the celebration from Times Square in New York City: