In 2007, Bruce Springsteen recorded a song called Radio Nowhere, which, among other things, lamented the death of quality rock radio at the hands of corporate media giants like Clear Channel and Infinity Broadcasting. Of course, a lot of people never got to hear it, because Radio Nowhere and most of the rest of the Boss's catalog were quickly banished from the nation's airwaves by those same corporate interests. When Bruce and I were growing up, rock radio, like rock music itself, was dynamic and edgy. Stations competed with one another for talent as well as listeners, and the best announcers threw themselves into developing their own unique styles and finding the best and most exciting music to play. Over the past 30 years, however, nearly every station of consequence has come under the control of one of the media giants, which invariably results in the adoption of small, tightly controlled playlists and a stifling of creative independence and personality. I hardly ever listen to the radio any more, but I've heard enough to know I'm not missing much. With respect to holiday music, the radio soundscape is just about as flat and uninteresting as you can get, which point is driven home by the by the first Billboard sales and airplay charts for this new holiday season. Haven't seen them? Well, don't worry. They're pretty much identical to the charts from last season, or for that matter any random season of the past dozen years or more: 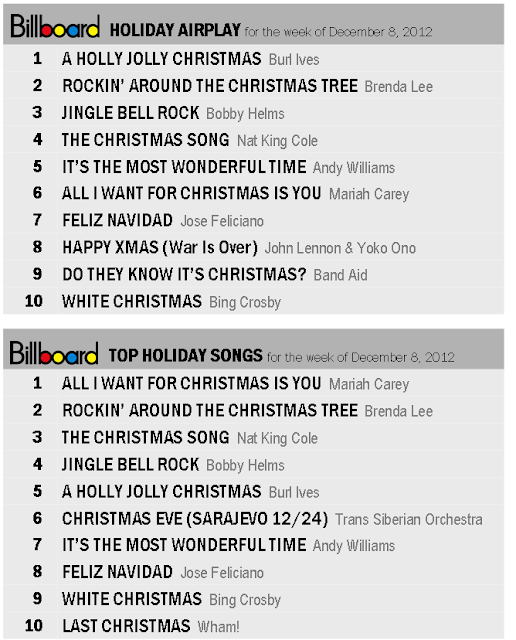 Considering the significant number of original, topical, funny and/or movingly beautiful holiday tunes that are released every year and the vast catalog of outstanding older material that's also available, it's maddening to realize how few seasonal songs are getting airplay. It's not that the songs getting airplay are necessarily bad songs; heck, one of the songs that made both the "top songs" and airplay charts is on my Christmas comp this year. The bigger point is that these are pretty much the only songs you hear these days because the lifeless corporate drones in charge of programming don't know any better. Little wonder that the number and variety of holiday music sites on the web seems to be increasing each year.

On a more positive note, the only two songs on the first of this season's Top Holiday Songs charts that weren't on last year's final chart displaced two monstrosities by Justin Bieber, so even though those two "new" entries (Andy Williams, at #7, and Wham!, at #10) have a total of 73 years of age between them, there's a silver lining to be found in most every cloud.

TOMORROW, we return to our annual review of the individual tracks on my latest holiday comp CD. (Gee, when you put it that way it sounds pretty grim, no?) We'll be commenting on sounds by Ozzy Osbourne, Al Sears and His Countrymen and the Rev. Edward W. Clayborn, who was telling Americans as early as 1928 that we'd lost our moral grounding as a nation. I guess that puts him just a little ahead of the curve.
Posted by Mark J in LA at 3:37 PM