Well, we're now at the half-way mark. There are 42 tracks on my latest holiday mix, Deck Those Halls, and, by the end of this post, we will have looked (albeit quickly) at 21 of them. But we have to offer something about each of these songs to get there, so let's have at it:

Track 21
Jingle Bells, by Laffy (2004)
Ten years ago, I included a little piece of something by an individual named "Laffy" on one of my first mixes, Don't Wake the Kids. It was actually Laffy's unique take on the holiday classic, "Carol of the Bells," which consisted of someone (I assume it was Laffy) basically laughing in rhythm to the song. I'd found it not long before among the hundreds of MP3s posted at the time on April Winchell's excellent website.  I'd never heard anything quite like it before -- I mean, have you?

April was a weekend personality on KFI-AM 640 at the time, and I absolutely loved her show, which was funny, fast-moving and irreverent. The collection of MP3s she offered in the holiday section of her website contributed quite a few tracks to my holiday CDs for a couple of years. Well, I assumed that "Carol of the Bells" was a unique item and that Laffy was a one-hit wonder, though even that may be stretching things beyond what they are. But this past summer I learned there's a whole album of these things. The thrill of that discovery faded quickly, as did my ability to even listen to this schlock for more than 15 seconds. However, I felt a strange sense of obligation to add a second track to my Laffy canon. Here it is, and I'd like to dedicate it to April Winchell. By all means. enjoy! 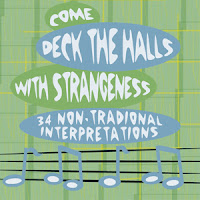 I can't tell you much about this one, except that it was sent to me a number of years ago as part of a collection called "Come Deck the Halls with Strangeness," which was put together by Frank "Bongolong" Lord, a longtime collector of offbeat music and pop cultural ephemera. You can read more about him in a nice profile on Blogio Oddio. It's a fascinating collection of tunes and clips, most of which are "nontraditional interpretations" of "Deck the Halls." My 2015 mix, like several of my previous annual mixes, skirts around a sort of loose and unstructured theme. Winter Wonderland offered several versions of that tune, while Let's Trim the Christmas Tree celebrated the holiday stocking. Just kidding. Many of its songs were about Christmas trees. My first several versions of this year's mix included at least three or four additional versions of "Deck the Halls," but that seemed excessive. The final CD has four versions of the song, though it seems like more.  The Bongolong album has 34 versions, more or less! I haven't found anything to report on Tom's Computer, the artist apparently responsible for creating this song, but it's an offbeat track that seems to fit in well. Here are a few versions that got left behind:

Listen to "Deck the Halls with Parts of Charlie," by the Crypt Keeper (1994) 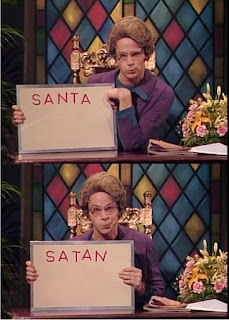 In the Fall of 1986, Dana Carvey and four other new cast members joined Saturday Night Live as part of a near wholesale makeover of the groundbreaking show. SNL had been on the air for eleven seasons by this time and the preceding season had been an all-out disaster. Most of the cast from the preceding season were released at the end of the 1985-86 season, and the show itself was on the verge of being cancelled. Between them, however, Carvey and the other newcomers (including Phil Hartman, Jan Hooks, Kevin Nealon and Victoria Jackson) helped turn the show around, and Carvey's signature Church Lady character played a significant role in the revitalization.

The clip I included in this year's mix is a very short bit that opened one of the Church Lady's pre-holiday episodes. It remains rather difficult to find many of the best SNL bits, even when you're willing to pay for them. I'm not sure why, but there's no question that Lorne Michaels or whoever runs the show over there is missing out on some real opportunities.

Anyway, this sketch first aired on December 5, 1987, 28 years ago. I actually remember watching and loving it back then for two reasons:  Jan Hooks' brilliant impression of Jessica Hahn, the woman accused of a sexual liaison in a cheap motel with the Rev. Jim Bakker; and Danny DeVito's appearance with the Church Chat Band doing "Here Comes Santa Claus." The only clip I could find online has been shortened and isn't top quality, but it's good to see all the same: