Our goal, as it is every year, is to offer a comment or two about each of the tracks on my latest holiday mix, and after the two we take care of today we'll have commented on 32 of this year's 37 tracks. Hang in there for just a few days more, my friends, and we'll all be better off for having made the effort.

Track 32
White Christmas (3:00 Weather Report), Steve Baron as "Bobby the Poet" (1967)
Political parody, satire, and comedy have always attracted sizeable and enthusiastic audiences in this country, going back almost to the earliest days of our Republic. Of course, the form in which it's presented has evolved over the years — from printed essays, newspaper cartoons and sheet music to Saturday Night Live sketches on YouTube  — but the aim hasn't changed too much. Americans like to see powerful people taken down a peg or two now and then. We detest hypocrisy, and we like to see how our would-be leaders react to the occasional sharp elbow or smart jab.

The right to poke fun at public figures in this country is solidly grounded in our Constitution, thanks, in large part, to the unanimous decision of the U.S. Supreme Court in a 1988 case titled Hustler v. Falwell. Hustler is an adult magazine that likes to include shocking material in its pages, and back in 1983 it ran a parody ad that suggested that the ultra-conservative religious leader Jerry Falwell lost his virginity to his mother in an outhouse while drunk. Falwell sued, claiming Hustler was guilty of the intentional infliction of emotional distress. However, the Supreme Court, in an 8-0 decision written by conservative Chief Justice William Rhenquist, held that the magazine was engaged in protected political speech, regardless of how offensive it might be to some:


The sort of robust political debate encouraged by the First Amendment is bound to produce speech that is critical of those who hold public office or those public figures who are ‘intimately involved in the resolution of important public questions, or, by reason of their fame, shape events in areas of concern to society at large.

Such criticism is essential to the protection of a free society.

"White Christmas (3:00 Weather Report)" is a silly little track that isn't particularly funny or insightful, and I'm not saying that because it pokes fun at my greatest hero, the late Sen. Robert F. Kennedy. This is one of a handful of similar numbers recorded by comedian Bill Minkin, who primarily made fun of Kennedy's accent. This was hardly a new idea. Several years earlier, comedian Vaughn Meader recorded an entire album of material about the Kennedy Family called "The First Family" that became the largest and fastest selling record of all time shortly after its release. "Bobby the Poet," of course, is supposed to be Bob Dylan.

I was able to find a clip of Minkin's 1967 appearance on ABC's "Hollywood Palace" variety show, in which he performs another of his Kennedy parodies, "Wild Thing": 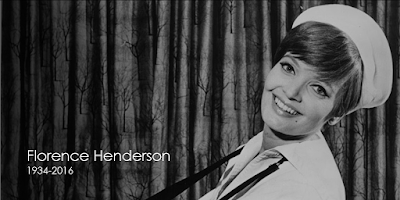 If you grew up in the 1970s, as I did, you're surely familiar with "The Brady Bunch," the story of a widower with three sons who marries a widow with three daughters to form a large and lively brood that appeared on our family room TVs every Friday evening. It's a show that's somehow become more popular and iconic years after it first aired — primarily, I think, due to the nostalgia factor. The show debuted in September of 1969 and ran for five seasons. This track is from the show's one and only holiday episode, "The Voice of Christmas," which first aired on December 19, 1969. Mrs. Brady, played by the late Florence Henderson, loses her voice shortly before she's scheduled to sing a beautiful Christmas carol in church. Her youngest daughter, Cindy (Susan Olsen) makes it her mission to intercede with Santa to make sure her voice returns in time. Florence Henderson died last month at the age of 82. The relevant clips from the episode appear below:

Five more tracks remain, so I won't be away too long.
Posted by Mark J in LA at 7:08 PM