Don't stop me, I'm on a roll! Here are some quick thoughts about the next three tracks from my annual holiday mix for 2016: 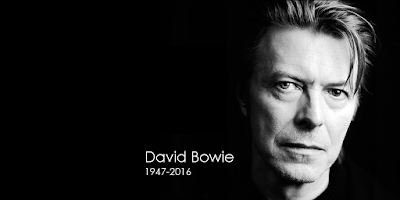 From all outward appearances, it seems as though David Bowie lived a wonderfully rich and happy life. Such statements are often intended as consolation following a premature departure. To me, particularly in the case of David Bowie, this richness of his life only serves to make his passing that much sadder.

Bowie was an artist, a writer, an actor, a songwriter, and a performance artist, but he will probably be best remembered as a tremendously bold and innovative musician and recording artist. I was a huge fan from as far back as I can remember. In fact, a brief glance at a list of his best-known songs conjures up a series of remarkably specific memories of where I was and what I was doing when each track first registered for me:  Changes, Space Oddity, Young Americans, Ashes to Ashes, Cat People (Putting Out Fires), DJ, Fashion, Let's Dance, Modern Love, Absolute Beginners, This Is Not America — the list goes on.

The track I selected for this year's mix is a short little holiday greeting Bowie recorded in 2013 for the BBC6 program "This Is Radio Clash." Speaking in the unmistakable voice of the late Elvis Presley, Bowie says:

“Hello everybody, this is David Bowie making a telephone call from the US of A. At this time of the year I can’t help but remember my British-ness and all the jolly British folk, so here’s to you and have yourselves a Merry little Christmas and a Happy New Year. Thank you very much.”

Interestingly enough, Bowie tied one of Elvis's record-breaking statistics shortly after his death this past January when 12 of his albums simultaneously scored spots in Billboard's Top 40 weekly album listings.

Of course, one of the most beloved David Bowie holiday tracks is a song he recorded with Bing Crosby in 1977 for the holiday television show "Bing Crosby's Olde Fashioned Holiday Special." Unfortunately, Crosby died before the program first aired, but this wonderful recording preserves the memory:

David Bowie was an absolute original, and he died far too soon.

Track 8
A Message from the King, by Bob Rivers

I posted about comedian/radio DJ Bob Rivers last year when I included his holiday-themed rendition of the Led Zeppelin classic D'yer Mak'er on last year's mix. This year I included a track brings Elvis Presley back to life and sits him (where else?) at the holiday dinner table:

Track 7
The Season's Upon Us, by The Dropkick Murphys

I like many different styles of music, but what I listen to and probably love most is straight-up rock and roll. Without meaning to do this intentionally, I noticed several days ago that many of my recent holiday CDs feature at least one rock track that serves a personal stand-out cut from the mix. Last year it was "O Christmas Tree," by The Orphan, The Poet. This year, it's the seventh track of the mix, "The Season's Upon Us," by the amazing Boston-based band known as the  Dropkick Murphys.

I was born in Boston myself, and for 17 wonderful years I lived in that city's diverse South End neighborhood. I worked for the City for several years under Boston Mayor Ray Flynn, and I spent a couple of years in the aggregate working on a number of local political campaigns. Boston's political scene is rich and exciting, as demonstrated by the number of Massachusetts natives who have gone on to national office, or at least played in the genuine major leagues.

Boston's also known as a breeding ground for up-and-coming musicians, largely because of the many colleges and universities in the area. I spent a year studying urban government at Boston University in the early 1980s, and there was never a night when some hot new band wasn't playing somewhere.

The Dropkick Murphys started taking off right around the time I was relocating to California, so I don't have any particular history as an early fan of the band, but I love their stuff and really enjoy this holiday track. The band took its name, by the way, from an old-time professional wrestler who competed (performed?) in the area during the 1940s. By the time I hit down, Dropkick was better known for his post-wrestling career as the manager of a well-known sanitarium for hardcore alcoholics. More than a few wonderful people became sober at Dropkick Murphy's, and there's a special place in heaven for him for the good work he did.