I'm in Bartow, Florida this evening, where the air is moist and warm and the ubiquitous Christmas lights serve as a reminder that the holiday is only a little more than two weeks away. I, of course, have fallen behind in nearly everything. Notably, I have yet to produce a single hard copy of my latest holiday CD, and that's a problem. For the past dozen years, my annual CD has served as my holiday card, and I don't want friends and family to think I've forgotten about them. I'm thinking of saving a copy of this year's mix to "the Cloud" and providing friends and family with streaming and downloading instructions by email or card. That would preserve valuable resources, eliminate needless trash, and save me several days' worth of hard work. Besides, CDs are so 1990s. A number of people I know and respect don't even have CD players anymore.

Here are some thoughts on several additional tracks from this year's mix:

Several weeks ago, someone at work asked me what type of music I was into. I'm never sure how to answer that question, for as crazy as I am about music, my tastes are very eclectic, and there are so many styles and artists I know nothing about. Moreover, I find it challenging to talk intelligently about some of the stuff I really like. Take funk, for example. I've got a pretty good idea what it is when I hear it, and I can rattle off a bunch of funk classics that I truly love. But I couldn't really define funk with any sort of specificity, nor could I name a single funk song, album or artist after the late 1970s. I'm pretty damn sure "Funky, Funky Christmas" by Electric Jungle qualifies as the genuine article, however, and while Electric Jungle doesn't seem to have released anything beyond this single 45 R.P.M., I'm willing to bet that had they done so, it would have been very funky, too.

I first heard this one several years ago on a spirited album I bought online from Strut Records called In the Christmas Groove, This is the second track I've used off the album. In 2012 I used a track called "Black Christmas," by the Harlem Children's Chorus on my CD "Here Comes Santa Claus." It's a moving and beautiful song in so many different ways, and I still can't listen to it without getting a little choked up.

Now, please don't confuse this track with a monstrosity of the same name by New Kids on the Block. If you want to hear that one, you're going to have to look it up on your own. 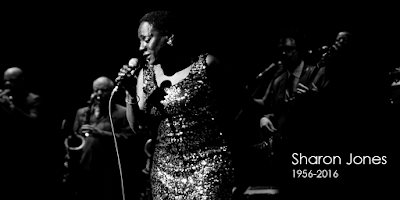 I've posted quite a few times about Sharon Jones in recent years, and her death last month came as quite a shock. She came to musical prominence relatively late in life, but Jones' career really started taking off over the past couple of years. She was an amazingly talented performer, and she will long be remembered for her contributions to the holiday music scene. "Ain't No Chimneys in the Projects" is among the very best new holiday tunes of the past ten years, and their 2014 CD "It's a Holiday Soul Party" manages to capture some of the energy and daring that was such an integral part of Jones' live performances. "Big Bulbs" is from that wonderful album, and you owe it to yourself to check out the complete package. 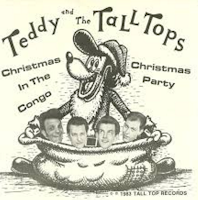 Let's take a trip back in time . . . not so far back as the 1950s, although at first blush this tune sounds like it may have been recorded then, in Memphis or thereabouts. Sounds just like Elvis, don't it? — the young Elvis, before Vegas and the extra weight and all. No, the trip I have in mind involves heading back to someplace in Texas in the early to mid-1980s. Times were good in Texas back then. The local oil business was running full tilt, jobs were plentiful, and in cities like Austin and San Antonio there was a whole lot of new music being made. Sure, country music was still real big with most folks in the Lone Star State, but there were plenty of other styles that were taking off there, too — particularly in college communities like Austin. One of the most successful local Austin bands at the time was Teddy and the Tall Tops. I'm not sure I'd call them a country band, although they were recognized as one of the area's best Country acts for several years at the Austin Music Awards. I think the better term is Rockabilly, or maybe Roots Rock — and, come to think of it, they did pretty well in that latter category at the "Austies" as well. Founded in the early 1980s Teddy and the Tall Tops was co-founded by Ted Roddy and blues guitarist Mark Pollock and included bass player Donny Ray Ford with Russell Flemming on drums. They appear to have recorded a couple of different albums back in the late 1980s and the band remained active on the club circuit (with various adjustments to their original line-up) well into the '90s. Word is that they started playing live gigs again a couple of years ago, although, sadly, without Mark Pollock, who died last year after an extended battle with cancer. The updated version of the band has been spotted a few times in Austin recently, at Ginny's Little Longhorn, and, just a couple of weeks ago, at the one-of-a-kind Lone Star Court.

"Christmas Party" was released in 1983 as the "B" side to the single "Christmas in the Congo." Both tunes are exceedingly hard to find these days. I've been searching for the "A" side for several years without any luck, although at least one site reports that it's an original song written by Ted Roddy. That sort of surprised me, as another song by that same name was recorded way back in 1959 by a group called The Marquees. What are the odds?