Here is some background and other thoughts on the next little batch of songs from my latest annual mix of holiday audio treats: 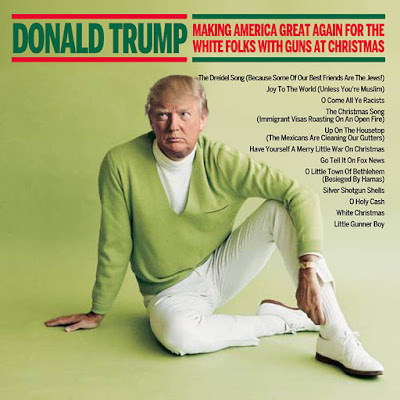 This may be small potatoes compared to the lengthening list of miserable appointments and horrifying decisions President-Elect Trump has made since Election Day, but I'm still deeply troubled by his willingness to not only jump aboard the preposterous "war on Christmas" bandwagon, but to urge it on to ever-increasing speeds and levels of dishonesty.

Lord knows I have no objection to a presidential candidate discussing a genuine love of Christmas, and I'm sure that the President-elect and his family truly love the holiday, just as he claimed at the Values Voters Summit in the September 2015 speech from which this track was excerpted. But to suggest that he can somehow require businesses to use the phrase "Merry Christmas" is preposterous. There's no question but that over the years there's been an increase in the use of more generic greetings such as "Happy Holidays," but that's driven primarily by the judgments of individual businesses that choose to appeal to a wider audience of customers. Interestingly enough, Trump's own business uses generic greetings, as does Trump himself in tweets and similar social media communications.

Talk of the so-called "War on Christmas" highlights both the fundamental dishonesty of this country's right wing and the President-elect's willingness to pander to its least intelligent members. To hear the right-wingers and Fox News tell it, President Obama and his rad-lib socialist baby-killers have all but criminalized the use of the phrase "Merry Christmas." One Fox News commentator recently claimed that neither the President nor the First Lady has so much as uttered the miserable word "Christmas" since they first entered the White House eight years ago, a claim that's soundly debunked by the following video compilation:

Sure, lots of commercial enterprises favor "Happy Holidays" over "Merry Christmas" these days, including the Trump Organization itself. That's because our country is becoming increasingly diverse, and it makes good business sense to be inclusive rather than exclusive. Neither President Obama nor the Democratic Party gives a damn how you address your holiday guests or holiday cards, and to suggest they're trying to destroy Christmas is just a bunch of malarky.

Track 19
To Heck with Old Santa Claus, by Loretta Lynn (1966)
Loretta Lynn is among the most popular country music recording artists of all time. She recorded her first hit, "I'm a Honky Tonk Girl," in 1960, and since then 11 of her songs have hit #1 on Billboard Magazine's weekly country music charts. In 1980, the Academy Award-winning biographical film about her life titled "Coal Miner's Daughter" became one of the top films of the year and the Academy of Country Music named her "artist of the decade" based on her work in the 1970s.

"To Heck with Ole Santa Claus" was written and recorded by Lynn for her first Christmas album, "Country Christmas," which was released in 1966. It also appears on "20th Century Masters, The Christmas Collection:  The Best of Loretta Lynn," and her latest album, "White Christmas Blue," which was just released this past October.

Track 18
Christmas in the Country Promo, by Johnny Dollar (1968)
This little gem was one of four promotional tracks released on a single record in 1968 titled "A Special Christmas Card." Each of the four tracks featured a different country recording artist droning on about the wonders of country music over the same dreary musical bed. What exactly did the four artists have in common? They all shared the same manager, Dick Heard, who was also the founder and president of the Royal American record label. All four tracks were posted on WFMU's late lamented "Beware of the Blog," which served up a slew of sensational off-the-wall tracks over its 10-year run. The blog was shuttered in July of 2015, primarily due to a lack of volunteer contributors, and, I'm guessing, a dwindling supply of postable material. After all, there's only so many bizarre clips, cuts and stories out there, and "Beware of the Blog" coughed up more treasures than you can believe. Happily, its rich archives are still available for your perusal at the same old address. Do yourself a favor and check it out. 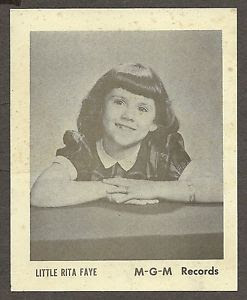 This is Ms. Wilson's second appearance on one of my holiday mixes. Two years before she recorded this song, back when she was known as "Little Rita Faye," Wilson recorded another Christmas tune in that same full-throated voice that makes this track such a treat. I included that earlier track, "I Fell Out of a Christmas Tree," on my 2010 mix, "Winter Wonderland" — in fact, it's one of my favorite tracks on the mix. Each of these Christmas tracks faded from public consciousness shortly after their initial release, but that didn't stop this plucky young woman, who continued to record for the next several years. Ironically, she achieved her greatest popularity when this track was included on a John Waters compilation of odd tunes and crank numbers several years ago. I've featured a number of tracks off the Waters collection on my various mixes, mostly as a joke. But this one's no joke. Her voice is strong and memorable, and she seems to have gained a certain maturity since her 1953 release. Give it a listen and see what you think.

Listen to "Sleigh Bells, Reindeer and Snow," by Rita Faye Wilson
Posted by Mark J in LA at 6:58 AM