Well, it's time to kick things off for 2017 and take on the chief responsibility I set for this blog when I first launched it back in 2011 -- namely, to offer some background, comments and fun facts about the various tracks on each of my holiday CD mixes. We typically attack the tracks in clusters of two or three each day in reverse order each day, so that once the comments are done you can read them straight through in reverse chronological order. So without further ado, here's our look at the tracks included on my latest holiday mix, It's Christmas Time Again! 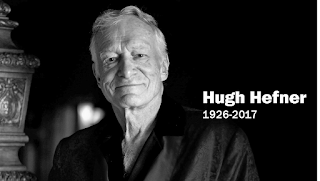 As in previous years, a number of the tracks on this year's mix pay tribute to well-known celebrities who died during the past 12 months, and the first such person year is Hugh Hefner, the founder and publisher of Playboy magazine. Recognizing Hefner was a difficult decision, for while he championed the principles of sexual liberation and free expression, which I enthusiastically support, he and his magazine objectified women and promoted images and stereotypes that many women found deeply offensive. I ultimately chose to include a short excerpt from an interview in which Hef described some of the holiday traditions observed at the Playboy Mansion. It was obvious from his remarks that this was a guy who loved Christmas -- after all, it was one of times each year when he ate dinner sitting in a chair rather than propped up in bed. Kind of a nice tradition, don't you think?


Track 3
Here I Come, Unknown Artist
I first ran across this creepy little number via the Internet Archive, which, among millions of other websites, songs and video clips stores recordings of a program called "Crap from the Past" that ran every Sunday night from March 1999 through October 2002 from midnight to 2:00 a.m. (so Monday morning, really) on KFAI-FM, 90.3 FM Minneapolis, 106.7 FM St. Paul, and KFAI.org. The show's host, Ron "Boogiemonster" Gerber, liked to call it "a pop music radio show for people who already know plenty about pop music," and I'd say that's as good a description as any. The December 17, 2001 show featured the third track on this year's CD, called "Here I Come." As Gerber explains, it came on a three-track record that also included a couple of spoken word stories. No artist was willing to claim credit for any of it, but it seems the record was made in Finland.

Track 2
Jing, Jing a Ling, by Honey and the Bees (1969)
I'm a huge fan of '60s and '70s Motown, soul and R&B, and there's a whole lot of fine but forgotten "urban" Christmas tunes from that era, several of which, I'm pleased to say, I've featured on previous CDs. This one's really special, and it manages to kick this year's mix into a dynamite groove from almost the very start. (Of course, we don't stay there for long, but it was nice while it lasted.)

Honey and the Bees were a short-lived and underappreciated girl-group based primarily in Philadelphia and made up of Nadine Felder, Jean Davis, Gwendolyn Oliver and Cassandra "Ann" Wooten "Jing Jing a Ling' was released as a 45 in 1969 (b/w Auld Lang Syne), made it one of their first releases. That was followed by a nice but relatively unsuccessful album called Love in 1970. The group broke up sometime around 1972, but within a short time, Oliver and Wooten hooked up with Cheryl Mason-Jacks and Richie Rome to form The Ritchie Family, a disco group that scored with two decent hits, "Brazil," which made it to #11 on the Billboard Hot 100 in 1975 and "The Best Disco in Town," which made it to #17 the following year. Wooten and Mason-Jacks later contributed backgrounds vocals to the John Lennon/Yoko Ono "Double Fantasy" album as well as several solo albums by Yoko Ono.

Listen to "Jing Jing a Ling," by Honey and the Bees

This year's mix starts off with a track from the 1983 movie "Monty Python's The Meaning of Life." I've never seen it myself, and I don't really have any interest in seeing it. I understand the guests at the giant Christmas party depicted when the song is performed are either dead or on their way to their miserable demise and that the song is meant to ridicule the modern Western materialist lifestyle most of us pursue and enjoy today. I heard the song earlier this year and immediately felt it could work as an intro song to an upcoming holiday CD, and when I decided to assemble a knock-off version of my regular mix this year, "Christmas in Heaven" just happened to be one of the first tracks I saw. I think it kind of works out in the lead position this year.

I'll be back with more tomorrow. It's another beautiful warm day in Los Angeles and I aim to enjoy a little bit of this beautiful weather while it's there for the taking.
Posted by Mark J in LA at 11:08 PM