Track 6
Holiday Message from Ian Anderson
I found this short track during a random Google search for recorded celebrity holiday greetings several years ago, stuck it in a folder of assorted holiday tracks and stumbled on it when I was throwing this year's mix together. It's a greeting from Ian Anderson, perhaps best known as the front man for the British rock group Jethro Tull.

My first memory of Anderson was his appearance on the cover of Time magazine in early 1973 along with several other pop stars as part of a story on pop records. I devoured Time magazine in those days, grabbing it from our mailbox as soon as it arrived each week and reading every story on politics, national affairs and music at least two or three times -- in fact, to this day I can recall every cover from 1973 through around 1977, after which I started to become less fanatical. Not long after this cover Jethro Tull released their album War Child, which featured the hit "Bungle in the Jungle," my favorite track by the band. 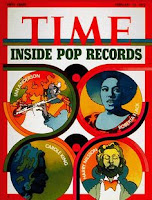 I liked that Anderson played the flute. I played clarinet in our school's concert band and at this point I identified more with brass and woodwinds than I did guitars. Anderson has remained active in the 43 years since I first became aware of him, and I liked the way he set up this short greeting. He sounds as though he'd be a fun guy to hang out with.

Track 5
Bo Derek on My Mind, Matt Vincent (1980)
I've been holding on to this one for nearly 10 years, and each year I wonder if this will be the year I finally break down and include it. Well, 2017 was a year in which we broke down and did a whole lot of things we'd managed to avoid previously, so what's one more travesty, right?

This track falls into that very special category of  music called "song poems," which boasts a sizeable number of holiday-themed nightmares such as this:


I want Bo Derek for Christmas 'til I'm 63,
Figure after that, I'll be stiffer than a tree,
Is that too much to ask out of Santa for a hard-working man,
Trying to make a buck, any way he can.

This song was recorded by Matt Vincent based on the lyrics of an ordinary American like you or me. "Matt" was employed by a company that charged the poet $100 or so to turn their beautiful words into an actual record. And if you think this song's a little lame, check out a few more currently available thanks to WFMU's "Beware of the Blog." There's even a few more Matt Vincent gems for you to enjoy.