Everyone seems to have a different idea about when the Christmas season officially begins. For shopping types, it's "Black Friday," a day on which I try not to leave the house. For merchants, it's typically the day the Halloween stuff comes down. For me, this year at least, it's the night Bruce Springsteen first plays "Santa Claus Is Coming to Town" at one of his live shows. Yeah, I know it's been overplayed on radio for each of the past 37 Christmas seasons (it hardly seems that long), but it's a genuine classic that manages in just 4:30 to both call up the Christmas spirit and capture the magic of a Springsteen live performance. Thus, by this admittedly subjective personal measure, the 2012 holiday season officially began last Thursday night when the song made its first appearance of the year as the penultimate number in Bruce's 26-song show at the CenturyLink Center in Omaha, Nebraska. This was the first time Bruce played the song in public since the death of band mate Clarence Clemons, whose booming "ho ho hos" and signature "you'd better be good for goodness sake" line are such a key part of the E Street version. Rather than designate a single individual to assume Clarence's part this year, Bruce asked the crowd to take on the job. Thanks to the magic of YouTube you can catch the results HERE, HERE or HERE, and you can find out more about the history of Bruce's version of the classic at the impressive Lebanese Tribute to Bruce Springsteen website. I knew that the classic Springsteen version of the song was recorded in 1975 at C.W. Post College and made available on tape to rock radio stations as a promotional item, and I knew it was officially released on vinyl in 1985 as the B-side to "My Hometown," the seventh Top 10 single from Born in the USA. But I didn't know that Bruce first performed the song live in December 1973 at the Bristol Motor Inn in Bristol, Rhode Island, or that it's the best-selling single download of Bruce's entire catalog. The song itself was written by John Frederick Coots and Haven Gillespie in 1934 and first performed on Eddie Cantor's radio show that November. (I featured Eddie Cantor's 1939 song "The Only Thing I Want for Christmas" on my 2009 holiday mix, "I Just Can't Wait 'til Christmas.") It was an instant hit, with orders for over 100,000 copies of the sheet music sent in the very next day! "Santa Claus Is Coming to Town" has since been recorded by scores of other artists ranging from Alice Cooper to the Partridge Family. 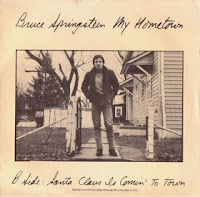 By the way, "Santa Claus" is hardly the Boss's only foray into Christmas music. In November 1986, the E Street Band's version of Merry Christmas, Baby was released as the B-side of "War," the first single from the blockbuster five-record set Live 1975-85. Over the years, Bruce has played numerous other holiday classics live, including Jingle Bell Rock, Blue Christmas, and my favorite Christmas song of all time, Christmas (Baby, Please Come Home). He's even written a couple of holiday songs -- a touching tune called "The Wish" that describes how his mother scrimped and saved to buy him his first guitar for Christmas one year, and a second number, touching, too, in its own way, called Pilgrim in the Temple of Love, which, believe it or not, chronicles the Boss's pre-holiday visit to the Fabulous Girls Nude, Nude, Nude strip club. This is one of Bruce's few X-rated numbers, but the live version of the song I've linked to (above) includes a sweet story about the existence of Santa Claus. (NOTE: This one's not safe for work, and make sure you don't play it near any kids or impressionable older folk.) I'm looking forward to seeing Bruce and the Band two weeks from tomorrow night in Anaheim, and I'm betting we'll hear something from his Christmas catalog. In the meantime, here's hoping the 2012 holiday season is a little more merry and peaceful than the pre-holiday run up has been and that Santa's magic touches you this year before the season ends.
Posted by Mark J in LA at 9:30 PM