My 2012 holiday mix has 38 tracks and this week I started posting a little background on each of them. We've looked at the first nine tracks already, and today we have two more, each of which is a terrific example of one of the styles I grew up on and still love today. You can't persuade me that today's top sellers are anywhere near as good as this:

Based in New York City, Sharon Jones & the Dap Kings were formed as part of a greater movement to revive and rejuvenate that delicious brand of 1960s and ‘70s funk and soul that once blared from stereos and transistor radios in cities from Philadelphia to Los Angeles. That’s a pretty tall order in a culture that worships superficiality and considers the 140-character tirades of a bankrupt casino huckster to constitute hard news. But they seem to be making steady progress – and you can’t help but root for them. From the old school riffs on their 2002 debut, Dap-Dippin’ with Sharon Jones & the Dap Kings, to the loose sensual energy of their more recent album Soul Time, these guys would have sounded right on in a James Brown Revue or opening up for Sly and the Family Stone. They’re serious and seasoned musicians, most of whom have played with or behind big-name talents and could easily outshine most of the so-called talents whose music sells well today, and when you add Sharon Jones’ powerful and emotive voice to the mix you end up with some truly fine music.

I downloaded Ain’t No Chimneys in the Projects without listening to it shortly after it was released in December 2009. Somehow I filed it in the “Sad and Depressing” folder I kept on the portable hard drive where I store my collection of digital holiday music. Maybe I assumed from the title that this record would tell a “sad and depressing” message? I don’t know. Fortunately, I discovered the song this Fall, as I sought to locate some suitably dark and somber tunes for the alternative mix I made to distribute in the event the President was defeated for re-election. (For more on all that, check out my holiday music website.) Well, the message is anything but sad and depressing. Indeed, it’s one of the most joyous and touching songs in this year’s mix, and it’s the only one to appear on both the official and “apocalyptic alternative” holiday mixes I put together this Fall.

According to Jones, “Ain’t No Chimneys” was something of a happy accident as they were finishing work on their critically acclaimed I Learned the Hard Way album:

This song came from one of those great jams the Dap-Kings have up their sleeve at any time. The band was playing the groove and suddenly the holiday spirit hit me, and with all the thoughts of Christmas it brought me right back to my childhood and I got to thinking about all the questions kids ask, ya know? Is Santa real? How does he fly around the whole world in one night? Ya know, all those kind of questions. And, of course my question was, 'How the hell did Santa get all those presents under my tree when there ain't no chimneys in the projects?'

You’ll have to listen for yourself to figure out the rest, but I can report that the story’s got a pretty damn fine ending.

Track 10
Black Christmas, by the Harlem Children's Chorus (1969)
This tuneful number was recorded in 1969 and was originally released as part of the album "Christmas Time with the Harlem Children's Chorus" on the Commonwealth United label. It first came to my attention 40 years later when it showed up on the In the Christmas Groove compilation from Strut Records. I wish I could share more information about it than that, but there doesn't seem to be a whole lot more information out there about either the song or the Harlem Children's Chorus. There seem to be a few copies of the older album available on eBay, but the closest thing to a review that I've been able to find is a short piece from the Associated Press that was carried by the Observer-Reporter newspaper of Washington, Pennsylvania: 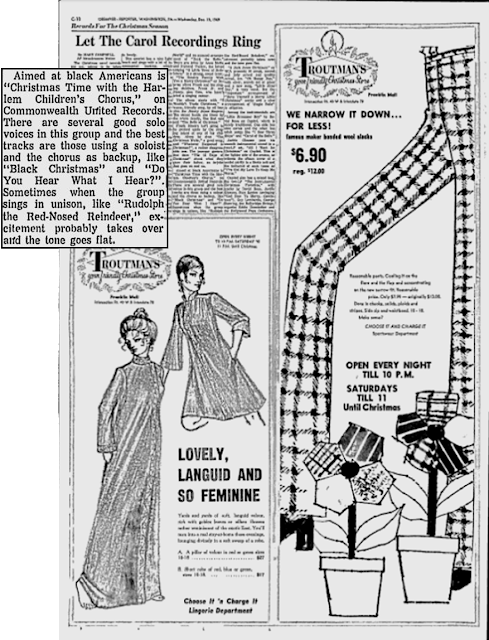 The soloist seems to be a young man of around 13 or 14, I'd guess, and he does a fine job. It's a touching song that harkens back to a different era not only of music but race relations and racial consciousness. I could be wrong, but I sense a certain firm defiance in way the soloist delivers many of the song's most pertinent lyrics:

People don’t dream of a Christmas that’s white,
Without a tree in sight,
We have a dream we dream every night:
Black is just as beautiful as white.


Yes, maybe one of these days.