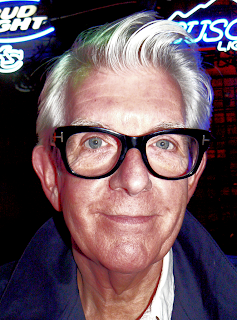 Quick! Who's that handsome devil pictured to the left? Believe it or not, that's Nick Lowe, the talented British singer, guitarist, songwriter and producer who burst on the scene in the late 1970s with such clever and catchy songs as "What's So Funny (About Peace Love and Understanding)," which became a hit for Elvis Costello; "Cruel to Be Kind," which made it to #12 on Billboard's Hot 100 in the Summer of 1979; "I Love the Sound of Breaking Glass"; "So It Goes," and, one of my favorites, "Switchboard Susan," which I played to death in my college radio days. Unfortunately, Lowe seemed to disappear almost as quickly as he arrived, and while he's released a steady stream of well-reviewed records over the past three decades, he's never again enjoyed the same level of popularity as he did when he first helped bring new wave and power pop to the States way back in the Jimmy Carter era. Fast forward 30+ years to 2013, and to our collective good fortune, Lowe's just released a new holiday album called Quality Street (A Seasonal Selection for All the Family) on Yep Roc Records. It's a rich mix of well-crafted pop tunes -- some familiar, others original. From the Memphis rave-up sound of "Children, Go Where I Send Thee" to the deliciously sentimental Roger Miller classic "Old Toy Trains," Quality Street has a little something for everyone. Well, no –strike that, for as Lowe himself emphasizes, this one's a "sleigh-bell free zone," meaning you won't find any of your typical saccharin-laced holiday fare here. But whether you think of Nick Lowe as the cutting edge artist who makes pure pop for now people or some old fool from your grandfather's distant past, you'll undoubtedly find something wonderful among this seasonal selection.