Well, we're off and running, friends . . . we've officially started our review of the 32 tracks on my latest holiday mix, titled My Christmas Time Philosophy. We've fallen a little off our intended pace, however, so we've got a little catching up to do. Today, we'll look at the next four tracks.

Track 6
My Christmas Time Philosophy, by Norris the Troubadour and the Seaboard Coastliners (1969)

This year's title track is an odd little tune that I've been holding onto for at least six or seven years now with the idea of using it as the title track for an upcoming holiday mix. I'm not sure why -- it just struck me that the title of this particular song was equally appropriate as the title for an album. This tune is usually classified as a song-poem, which typically refers to a set of lyrics that have been set to music for a fee, often in response to an ad in the back of some cheap pulp magazine. In the late 1960s and '70s, adding third-rate music to amateur poetry became a pretty good racket for a few folks as frustrated housewives and down-and-outers funneled more money than they could comfortably afford to a handful of companies that would churn out dozens of cheesy tunes every day. Regular readers of this blog will know that I'm a huge fan of the song-poem genre. Indeed, I've included more than a few holiday song-poems on my collections over the years. Song-poems have been attracting increasing attention in recent years thanks to the promotional activities of fans like magician Penn Jillette, the late NRBQ drummer Tom Ardolino and the Rev. Susie the Floozie of the Church of the Subgenius. (More about them several days from now, Praise Bob!) In addition, song-poems have benefitted from the increase in appreciation of so-called outsider art, of which they are considered a particularly interesting subcategory. 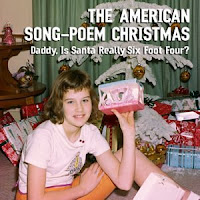 I first ran across this track on the fabulous 2003 collection called The American Song-Poem Christmas: Daddy Is Santa Really Six Foot Four?  In fact, this album has been the source for a number of holiday classics featured on previous mixes over the years, including "Old Year Christmas," by the Sisterhood; "Santa Came on a Nuclear Missile," by Heather Noel; and "Santa Claus Goes Modern," by Rod Rodgers and the Librettos. But "My Christmas Time Philosophy" is a truly one-of-a-kind holiday song that tugs at my heart the way few others do. Part of the appeal, I think, is combination of the painfully earnest lyrics and their slow, almost emotionless delivery:

Keep those bells ringing high on their steeples
Everybody be kind to old people . . .


What makes this tune a bit different from the typical song-poem is that, near as I can tell, the lyricist did more than simply write the lyrics and pay a fee – "Norris the Troubadour" wrote the lyrics, wrote the music, sang, played an instrument … oh, yes, and also paid a fee. "Norris" was actually a former merchant marine named Norridge B. Mayham who has become something of a legend in the song-poem world. As music journalist Phil Milstein explains,


Norridge Mayhams was a first-class card. In a half-century-long career in which he toiled as songwriter, performer and record company executive, Mayhams authored a body of work that is staggering in its scope, quality and general strangeness, with a fast-and-loose approach to crediting his work that confounds discographical comprehension.Mayhams's songwriting career stretched from the mid-'30s up until his death in 1988.

His early songs, cut at various New York sessions between 1936 and '38, were lively but fairly conventional gospel and novelty blues. Even back then he was apparently subsidizing the recording of his own material; since song-poem companies had yet to evolve from sheet music to records, it seems that these early recordings were made with Mayhams' hands-on participation, as opposed to the strictly mail-order nature of the true song-poem companies.

Among Milstein's other credits, he's perhaps best known for writing "We'll Build a Bungalow," which was featured on an episode of I Love Lucy as the piece de resistance of a joint performance by Lucy and Ricky at a benefit show put on by Lucy's women's club. But Mayham was a busy guy throughout much of his musical career, traveling extensively and releasing a good number of 78s, 45s and 33s.


Little is known about Mayhams' performing career. He apparently sang lead on at least some of his own recordings, but he was as likely to farm his songs out to a song-poem factory like Globe Recording Studios – where they'd be sung by the likes of Sammy Marshall (as "Professor Marcell") – as he was to take the mic himself. It's unknown whether or not he played any instruments on his recordings. My guess is that as Norris the Troubadour he spent many years playing coffeehouses and college-town pubs in the Northeast, but the only actual evidence of that is a 21-page booklet he self-published in 1947 entitled Experiences Of A Collegiate Singer by Norris, The Troubadour.

Norridge Mayhams' world started crumbling in 1977, with the death of his wife Shirley. In 1979 his son Benjamin was murdered in a grocery store hold-up. In tribute, Mayhams wrote his final song, "God's Heaven's Heavenly Grocery Store," which he didn't register for copyright until 1986. It's unlikely that a recording of it was ever made. In '81 his other son, Norridge Smalls Mayhams, died. His musical endeavors wound down until, in 1988 Norridge "the Troubadour" Mayhams himself began strolling the aisles of God's heavenly grocery store.

For more of Milstein's thoughts on Mayham, check out the American Song-Poem Archives.

I try to avoid using anything more than once on my holiday compilations and when I used this track as the title song of this year's mix I truly believed I'd never featured it previously. But I discovered to my embarrassment several days ago that the song appears on Hooray for Santa Claus, a special mix I put together in 2007 for a charity program my employer at the time was hosting. Sorry about that. I'll try not to use it ever again!

Cara Stewart is another big name in the world of song-poems, although unlike Norris the Troubadour, she only sang her contribution to this year's mix. She's not to blame for the lyrics or the music of "Gay Bright Christmas." I'd say that will only get her but so far as we work to assess the blame for this one.

Listen to Cara Stewart's Incredible "Song of the Burmese Land"

Although I occasionally do feel guilty about it, I don't do too much to hide my political beliefs in this blog. I'm a proud, liberal Democrat and I can't for the life of me understand how any halfway intelligent person could support the disgraceful idiot who's currently in the White House. I'm especially incredulous when I see so-called Christians in his corner considering that the values he espouses are just about the polar opposite of the teachings of Jesus Christ. But it's Christmas and I believe we're called to overlook other people's flaws as best we can. "Judge not lest ye be judged," as the Good Book says, and I surely don't care to be judged by those who believe building walls and teargassing toddlers is acceptable conduct. In fact, this year I've yielded the time typically reserved for holiday greetings solely to the Republicans and we're starting them off with remarks from Vice President Mike Pence. He'll likely succeed to the presidency before next year is out so I figure we'd better start getting used to him.

Track 3
Christmas Is a Drag, Jimmy Jones and the Versatiles (date unknown)

I wish I had even a little news to share about this tune, but I don't. I like the fact that Mike Pence's little clip is sandwiched between "Gay Bright Christmas" and "Christmas Is a Drag," however. I can imagine it's not a comfortable place for someone who thinks as he does.

I'll be back with more musings on this year's tracks sometime soon.