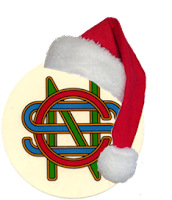 Having now reviewed this year's crop of new holiday releases, let's turn our attention to one group that won’t be releasing a holiday record this year – Crosby, Stills & Nash. I’ve been a big fan of these guys for years, and I’ve been lucky enough to see them play a whole bunch of times in all of their various combinations and permutations, with and without their sometime bandmate Neil Young. Best known for their intricate harmonies and social consciousness, CSN has survived more ups and downs – individually and as a group – than just about any band out there, yet after 44 years they're still playing together and still sounding good. I've always thought CSN is especially well equipped to do a fabulous holiday album, and after watching them play "My Country ‘tis of Thee" on the first episode of The Tonight Show following the 9/11 attacks, I was more convinced of this than ever (see video, below). So I was thrilled when Graham Nash leaked word several years ago that the group had signed a two-record deal with Columbia that called for one album of cover songs followed by an album of holiday material. As Nash explained,

Under the terms of their record deal, CSN was paired with respected producer Rick Rubin, who was also Columbia's president at the time. On paper, it seemed to be the perfect fit. Rubin's production discography includes some of the biggest albums of the past 20 years, and while he's worked with an incredibly diverse group of artists, he is perhaps best known for reviving the careers of such veteran performers as Johnny Cash and Neil Diamond. Unfortunately, Rubin's relationship with CSN got off on the wrong foot, and only grew worse. According to published reports, the band became frustrated with Rubin's preoccupation with other projects and felt they weren't getting as much of his time as they deserved. Moreover, the band – particularly Crosby – felt Rubin was being too directive and too often substituted his judgment for theirs. According to Nash: “After almost 50 years of making records, we think we know what we’re doing, so it’s very hard to tell Crosby, Stills and Nash what to do. You can suggest anything you want, but you can’t tell us what to do." With frustration mounting on both sides of the studio, CSN and Rubin opted to part ways before the first record could be completed. Crosby and Nash have each been quoted as saying they remain committed to finishing the album of cover songs with Stills, but nothing much has been said publicly about the Christmas project.

One factor weighing against a CSN holiday album is the many competing demands on the artists' time. CSN has been touring as a group pretty much every summer and they regularly write new songs to add to their performances. In addition, Stills has put together a group called The Rides, which is made up of Stills, bluesman Kenny Wayne Shepherd, and Electric Flag’s keyboardist, Barry Goldberg, with support from Chris Layton, former drummer of Stevie Ray Vaughn’s Double Trouble, and CSN bass player Kevin McCormick. The group released a fine sounding album this year titled Can’t Get Enough. Stills contributions are especially strong, including the track “Don’t Want Lies,” which was the highlight of CSN’s recent performance at Neil and Pegi Young’s annual Bridge School benefit last month. (You can watch CSN’s rendition with special guest Neil Young HERE.)

It's great to see Crosby, Stills and Nash as active and vital as they've been in recent years, but with each passing holiday, the likelihood of a CSN Christmas record diminishes slightly. Stills, 68, has apparently been dealing with a number of medical issues in recent years. Crosby, 72, underwent a liver transplant in 1994 after years of drug abuse, and he suffers from diabetes. Hopefully, all three will be able to play and record for many years to come, and somewhere along the way we'll have a chance to hear their signature harmonies on such songs as "Silent Night," "What Child Is This?" and "Santa Claus, the Original Hippie."

In the meantime, CSN fans who dig Christmas music can drag out my groovy 2009 mix, I Just Can’t Wait ‘til Christmas, and play the Barenaked Ladies' song “Deck the Stills,” from Barenaked for the Holidays. And then there's this YouTube video (below), which is billed as Crosby, Stills, Nash & Young playing "White Christmas" . . . although something seems a little off, wouldn't you say?