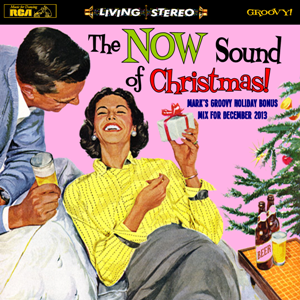 In addition to my regular annual mixes, every now and then I put together an extra bonus mix, usually focused on a particular theme or style of music. For example, I've done a couple of mixes of New Year's music, and another featuring holiday music with an outer space theme. Several of these bonus mixes are still available on my holiday music website. Well, I've put together another bonus disc this year and just posted it on my website for your listening pleasure. It's called The NOW Sound of Christmas, and it contains 50 minutes of groovy holiday sounds from the late 1960s, courtesy of the hip cats of the NOW generation.

The idea for this one came from a pair of promotional records I stumbled across several years ago that were made in 1968 by – are you ready for this? – the United States Air Force! The first, A Christmas Party with Sandler and Young, while pleasant enough, was not particularly groundreaking. But the second – The NOW Sound of Christmas – was truly out of sight! It features music by the Airmen of Note, the official Air Force Dance Band, with special guests The Free Design, a bunch of starry-eyed Canadian hippies. Not exactly the most natural pairing in the world, huh? But you know something? It works. The resulting material typifies the rich pop style that was so popular in the late 1960s – the sound of The Fifth Dimension, The Association and The Byrds. My special bonus mix includes five awesome tunes from The Free Design and adds 19 other songs with that same sort of feel. Start playing this one, and pretty soon you'll be slipping on some love beads and a pair of bell bottoms. Don't have any? Well, hey! Christmas is right around the corner!

Be sure to check out The NOW Sound of Christmas soon. It's likely to remain available for a limited time only.

Review the Track List for The Now Sound of Christmas

Learn more about, listen to or download The Now Sound of Christmas

Email ThisBlogThis!Share to TwitterShare to FacebookShare to Pinterest
Labels: Sandler and Young, The Free Design, The NOW Sound of Christmas