My 2011 holiday CD is titled Gee Whiz ... It's Christmas (Again!), and my first posts on this new blog have featured some of my thoughts about the individual tracks that appear on this year's release. I'm reviewing the 43 tracks from start to finish, however, the tracks will be presented in reverse order within each day's individual post. Today's post looks at Tracks 8 through 12: 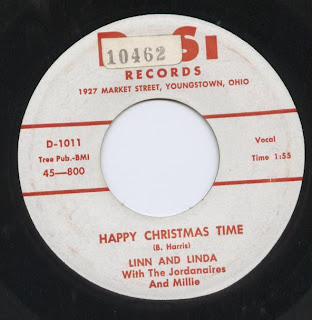 This track was the "B side" of a rather sad holiday single called "Christmas Orphan" by an all-but-forgotten act who went by the name Linn and Linda. I haven't been able to find out much about them or this song. From the look of the disc label, this could have been a low-budget vanity release, except that Linn and Linda secured The Jordanaires to sing back-up for them. The Jordanaires were closely associated with Elvis Presley throughout most of his career, frequently touring with him and singing back-up on many of his biggest hits. That's a pretty high-powered back-up group for a vanity act. In any case, this is a sweet little tune that I like a lot. I'm especially keen on the lyrics about the holiday gifts received by members of the household:

Daddy got an electric razor,
That’s the fad these days,
Mommy got a hair kit,
Makes gray hair fade away.

Me I got a dolly,
My sister got the bed,
And we got some doll clothes,
And bonnets for our head . . .
And little Junior got his gun.


Christmas time is happy,
Excitement everywhere,
There’s fun for everybody,
So throw away your cares.

Christmas Is On Its Way, by Little Marcy Tigner (1973)
Gospel singer, trombonist, and fledgling ventriloquist Marcy Tigner couldn’t seem to find her niche in the entertainment world until the early 1970s, when her husband, Everett, overheard several record company executives discussing plans to recruit youngsters to record a new children’s record. After sharing this news with Marcy, Everett helped his bride cut a demo tape, which consisted of several Bible songs rendered in the style of a very little girl. Well, Marcy not only got the gig, but she also got herself an imaginary friend in the form of her new alter ego, Little Marcy. Tigner and Little Marcy were prolific during the 1970s, releasing more than 30 children’s records, nearly all of which focused on Christian themes. In fact, the act became so popular that a Little Marcy doll was mass produced and marketed along with the records and, eventually, videocassettes. This song is the title track from one of Little Marcy's 1973 albums, and, in case you're wondering, it doesn't fall under the category of Mark's Genuine Favorites. Quite the opposite. I’ve always thought that including some truly awful material on my annual CDs makes them more entertaining and memorable. My first several CDs were almost entirely made up of stuff like this. In time, I’d like to think I managed to strike a more appropriate balance between good and awful. Retaining a sizable sample of kitschy numbers not only makes you laugh, but it helps make everything else sound that much better, don’t you think?

Christmas Seals Promotion, by Ricardo Montalbán (1965)
For more than 100 years, the American Lung Association has depended on the annual Christmas Seals campaign for a major portion of its funding. Colorful stamps are typically sent free of charge to households across the country every Fall in order to raise awareness of lung-related diseases and solicit contributions. The late Ricardo Montalbán recorded this promotional message in 1965.

Track 8
Another Xmas Day Can Only Disappoint U, by Payroll (2006)
This track’s a mystery to me in that I can’t tell you much of anything about the band that performed it, what its lyrics mean, or the context in which it was created. I found this song several years ago on a compilation record called A Very Booty Christmas. Although the title sounds rather cynical and depressing, the tune is upbeat and pleasant, and it struck me as a good track to follow Wish List. I’ve searched the internet for more information about Payroll, but about all I found was a listing in the All Music database that they released an EP in 1999 on the Anvil Records label. Anvil seems to be almost as mysterious as Payroll, although I did discover a My Space page that suggests the label has six bands on its roster and is run by a fellow named Colin Bartram, who is based in Moltonborough, New Hampshire. I went to summer camp near Moltonborough for several years, and I can tell you it's not exactly the musical capital of the Northeast. In any case, I like this song a lot. If you know anything more about it than I do, I’d love to hear from you.

Watch for thoughts on the remaining tracks from this year's CD in the coming days. Meanwhile, I hope you're having a wonderful holiday season!