Thanks for joining me today as I continue to offer inspired commentary on the 43 tracks from my latest holiday CD, Gee Whiz … It’s Christmas (Again!). We started this endless trek what seems like ages ago -- what? it's only been 10 days? Well, we've made a lot of progress anyway. After today, it'll be 37 down, 6 to go. With gratitude for your courage, I say let's press on!

Track 36
Hanukkah, Oh Hanukkah, by The Yule Logs (2009)
I’ve always loved this song, and I especially like this version of it by “the hardest working band in snow business,” The Yule Logs, from Chico, California. This high-energy, power pop foursome features Marty Parker on vocals and percussion, Kirt Lind on bass, Jake Sprecher on drums and Maurice Spencer on guitar. These guys have been getting together to play select holiday shows for something like six or seven years, and for the past three years they've celebrated each season by releasing a new album of rockin' holiday tunes. How awesome is that? Each of the three includes a mix of classic and original songs, and, happily, Hanukkah songs are well represented, too. My Track 36 comes from their 2009 self-titled debut album, which was followed in 2010 with Walked with a Reindeer, and, finally – no, let’s not say that – ah, yes, most recently, this year’s new release, You Ruined Christmas. This is an awesome band that deserves our support, especially as they have to pack a whole year’s worth of action into the all-too-short holiday season each year. Check out their website, or consider buying their music on iTunes, CD Baby or amazon. Unfortunately, their last gig for this season is tonight at the Chico Women’s Club (see their website for details), but I trust they’ll be back next year.

Here's a clip of The Yule Logs doing Christmastime Is Here (Again!) from their self-titled debut album: 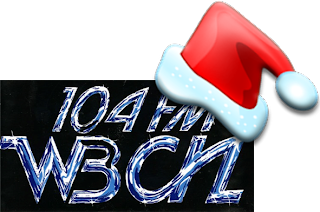 I’m not sure I fully appreciated it at the time, but we had an embarrassment of riches on the radio in Boston when I was growing up. No matter what you were into, there was always at least one great station playing lots of it. As a youngster, I’d listen to whatever station broadcast the Red Sox, which I’m pretty sure was WHDH in those days. By the time I was 11 or 12, I was listening to WEEI-AM, which was a talk radio station before talk radio became big. I loved anything that had to do with politics. (Yeah, I was a nerdy little kid.) By age 13, I’d discovered rock music, and I listened to WBZ-FM every day after school and followed their Top 40 countdowns religiously. But from the time I started college until I left Boston for L.A., my station was WBCN-FM, the “Rock of Boston.” WBCN was one of the first free-form progressive rock stations in the country, which meant that the individual DJs enjoyed relatively wide discretion in deciding what to play. They were especially well known for playing stuff from struggling new and local bands, and the station is credited with helping to launch such groups as the Police, U2, Dire Staits, the J. Giels Band, and the Cars, among others. WBCN's on-air talent included such notable figures as Charles Laquidara, Ken Shelton and Carter Allen, while the gifted Billy West and Tom Sandman created a seemingly endless supply of comedy bits and promos that served as a great complement to the music. “Merry Christmas, Boston” is a track that was played for at least seven or eight years during the holidays, and listening to it makes me a little homesick for those 10°F December days. Not homesick enough to relocate, mind you, but a little wistful anyway. Here it is:

As a special treat for any other former Bostonian BCN junkies out there, here are a few more Billy West/Tom Sandman creations to make you smile:

Don’t Get a Hearing Aid, You’re in Lynn, MA

With just six tracks left and seven days ‘til Christmas, I figure I can finish my commentary at a pretty leisurely pace. Unless anyone objects, I’m planning to throw in a few other holiday treats over the next week or so. It just doesn’t feel right to slack off too much while Santa and his team are kicking into highest gear.
Posted by Mark J in LA at 8:35 AM