Today is Christmas Eve, and I'm writing this post from North Yarmouth, Maine, where it's cold and slightly overcast with a nice coating of snow on the ground. Our chief piece of unfinished business is posting a few thoughts on the three remaining tracks from my latest holiday mix, C'est Noel!  I do this in reverse order within each day's entry so you can scroll the blog in reverse to read all of the track entries in reverse order without having the list jump back and forth too much. It seemed like a good thing to do when I started the blog three seasons ago, but now I'm not sure that it just doesn't make me appear that much more eccentric than I already am. OK, then . . . let's get started!

The jazz world lost one of its truly iconic artists this year with the passing of Donald Byrd, an American jazz, funk and rhythm and blues trumpet player who died in February at the age of 80. A native of Detroit, Byrd left for Manhattan in the 1950s where he earned his master's degree at the Manhattan School of Music and began to play with some of the best jazz musicians of the day including John Coltrane, Sonny Rollins and Thelonious Monk. Pianist Herbie Hancock credits Byrd as one of his principal mentors, and Hancock was a key contributor to several of Byrd's most successful jazz albums, including the popular Blue Note release Free Form (1961). Following a brief sabbatical in Paris, Byrd released the brilliant album A New Perpective in 1963, which, among other things, added touches of gospel to the mix. "Cristo Redentor" is perhaps the most notable of the tracks on that record – indeed, of Byrd's career. Of the album, Byrd later said:


I mean this album seriously. Because of my own background, I've always wanted to write an entire album of spiritual-like pieces. The most accurate way I can describe what we were all trying to do is that this is a modern hymnal. In an earlier period, the New Orleans jazzmen would often play religious music for exactly what it was - but with their own jazz textures and techniques added. Now, as modern jazzmen, we're also approaching this tradition with respect and great pleasure.

"Cristo Redentor," which translates as "Christ the Redeemer," isn't, strictly speaking, a Christmas song, for its meaning extends well beyond Christ's birth and its celebration. But it's a magnificent piece of jazz whose soaring trumpet and soothing vocals elevate the spirit and captures the joyous celebration that Christmas has come to embody. It strikes me as a wonderful way to close almost any collection.

In this increasingly homogeneous age, where shopping malls from Anchorage to Miami are anchored by identical Bed Bath and Beyonds, it's nice to see a bit of local color and tradition survive in different cities and towns across the country. If you're not from Philadelphia, you've probably never heard this tune before; but, if you've ever lived in the City of Brotherly Love during the holidays, it's almost sure to ring a bell or two. The song was written by Alan Mann, who was active in Philadelphia's South Street punk scene in in the early 1980s. Before that, he'd been into folk music, and his fledgling band could pretty much play anything from the Byrds to Springsteen to the Sex Pistols. While walking around Philadelphia's Overbrook neighborhood one day, he spotted a lavishly decorated house and asked someone who lived there. It turns out the building was a group home for the blind, and even though the residents of the home were unable to see the fruits of their labor, each year they spent hours putting up Christmas lights and decorations for their sighted neighbors to appreciate. This got Mann to thinking, and the result was this song, which he wrote in 1982. Mann first recorded the song with his band, and later brought in a second grade class to add the adorable vocals you hear in this version. The song received modest local airplay at first, but it didn't really achieve classic status until it was turned into a video several years later and became the first independent video aired on MTV in regular rotation. Although this wasn't disclosed for many years, the original video wouldn't have been made without the quiet backing of Yoko Ono, who was moved by the story and the children's choir Mann had used, which reminded her of the song she and John Lennon had recorded several years earlier, "Happy Christmas (War is Over)." Tragically, Mann was killed in a fire several years after this song was recorded. But both Mann and this song are still celebrated each Christmas season, and the message of "Christmas on the Block" still resonates today. 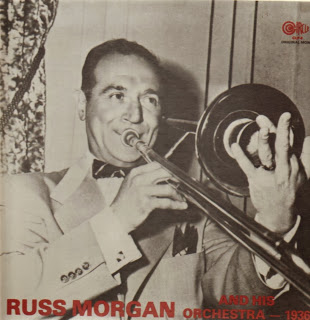 I'm afraid I don't have an awful lot of information to share about this track, which was recorded in 1956 by the Russ Morgan Orchestra. Morgan was a pianist, trombone player, composer and big band leader who was active and popular from the 1930s until his death in 1969. He traveled extensively throughout the period, recorded for films, hosted a number of very popular radio shows, and had several hit records, but he was best known for his lengthy live performance runs at some of the better known hotels in the country, including the Biltmore in Los Angeles, the Edgewater Beach Hotel in Chicago and the Dunes in Las Vegas, where he was the headliner at the Top O' the Strip club for nearly 12 years. This track is a rather obscure record, but one that seemed appropriate for the end of this year's mix as a nice way to bring things down a bit.

That concludes our look at the 35 tracks on this year's mix. I hope you've enjoyed my latest collection of holiday mishegas, and that we'll be able to get together again next Christmas for another mix of interesting holiday music. I'll have a few more items to post before we close down the blog until next season, so be sure to check back between now and January 1. But for now, I hope you enjoy Christmas Eve and Christmas Day in whatever way is most meaningful to you.
Posted by Mark J in LA at 8:28 AM