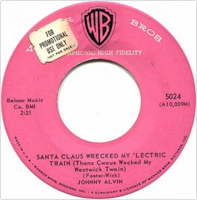 In the aftermath of World War II, Americans embraced the celebration of Christmas with newfound fervor. For the millions of families whose lives had been so horribly disrupted by the conflict, the prospect of celebrating the holidays with loved ones once again was a treasured opportunity. Coincidentally, the relative prosperity of the post-War period together with the increasing influence of the mass media both allowed and encouraged more lavish spending on parties and gifts. Finally, increasing fears of communism burnished this country's love of Christmas as a uniquely American value to be fiercely protected. Little wonder then that the 1950s saw a huge increase in the volume of newly recorded Christmas music of every type and description. Among the many new subgenres that became popular in the Eisenhower years was the "kiddie record" – holiday tunes sung by a young children whose underdeveloped communication skills were typically offset by their unbridled excitement about the iminent arrival of Santa Claus. Although I've featured a few of these kiddie tunes on previous holiday mixes, we've barely scratched the surface condidering just how many of these records are out
there. Sorry, folks, I've no choice but to include one from time to time.

Recorded in 1958, this monstrosity was released during the tail end of the kiddie record boom. It's entirely possible that it single-handedly brought this craze to a speedy conclusion – yes, it's that bad. Interestingly enough, it was apparently the first Christmas single released by the newly formed Warner Brothers label. On the bright side, of course, its release guaranteed that the label had nowhere to go but up. Happily, this appears to be the only record young Johnny Alvin ever released. But, of course, singles have B sides, and this one features another train wreck: Johnny Alvin’s “Rudolph, the Red-Nosed Reindeer.” I had intended to save that one for a future mix, but this Black Friday weekend has left me in a mood that's somewhere between generous and sadistic, so I have little choice but to offer up both of little Johnny's creations (below) to brighten your day. Incidentally, the last few seconds of this track weren't on the original record but were rather added by me. It's an excerpt from one of last year's most famous viral videos based on an interview with Oklahoma resident Kimberly "Sweet Brown" Williams about her escape from an apartment fire.


Track 5
Christmas City, by Merv Griffin (1959)
Few men or women in show business have done as much or been as successful as the late Merv Griffin. He started out as a vocalist and big band leader, appeared in films and on Broadway, hosted his own television talk show, created and produced several wildly successful television game shows and ultimately became a hotel magnate who, at the time of his death in 2007, was widely believed to be worth well over $1 billion. However, this simple track predates all of that, which is one of the reasons I’m so keen on it. It was recorded in 1959 to help promote the “Christmas City of the North” parade in Duluth, Minnesota. For the past 56 years, this parade has kicked off the holiday season in Greater Duluth, and “Christmas City” remains its theme song to this day. The parade got its start in 1957, when Thanksgiving Day fell especially late thereby shortening the traditional holiday shopping season. Eager to help his advertisers by starting the season early, the owner of KBJR-TV Channel 6, Bob Rich, conceived the notion of a pre-Thanksgiving parade to extend the holiday shopping period. Since then, the parade has run through Downtown Duluth every year on the Friday before Thanksgiving – the sole exception being 1963, following the assassination of President Kennedy.

While “Christmas City” has always been a key part of Duluth’s celebration, most people had no idea how Merv Griffin first got into the act. Several years ago, however, the grandson of parade founder Bob Rich penned an article in a local blog that shed some light on the subject:


In the early 1960s a gentleman by the name of Don Peterson approached my grandfather with two songs he had written for the parade. “Christmas City” the upbeat, toe-tapping song you can’t help but sing along with, and “The Song of the Christmas City,” a slower-tempo tribute with a jazz feel similar to Bing Crosby’s “White Christmas.”

My grandfather then asked a friend of his, Merv Griffin, if he would sing the songs and put it to music. This was well before Mr. Griffin had become the successful TV personality and media man that he would later become. Both Merv and his wife flew to Duluth, met with my grandparents and stayed at their house on London Road. Merv took the sheet music back to a recording studio in New York City where both songs we pressed on a 45rpm record with full big band orchestras. Merv’s wife also sang on one of the songs.

Track 4
C'est Noel, by Les Intimes (1964)
This track, I’m sorry to report, is another one of those mysterious songs that I know very little about. I stumbled across the tune several years ago and saved it to my computer with only the title, artist and year it was recorded. I’ve searched the internet for additional information, but while the song itself is available from numerous sources, I haven’t been able to find anything more about Les Intimes or anything else they may have recorded or performed. I wish I knew more, because it’s a great little song, although, in fairness, it loses a point or two on the originality scale. From my first listen, I was struck by its similarity to the Beatles classic “All My Loving,” which was also recorded in 1964. Could this song actually have been recorded by Beatles under a pseudonym? A number of records have been the subject of similar rumors over the years, including Badfinger’s “Day After Day,” released on the Apple label in 1971, and the debut album of a band named Klaatu, in 1976. However, the closest thing I know of to an actual Beatles-album released under a false name is Thrillington, an easy-listening style instrumental version of Paul and Linda McCartney's 1971 album, Ram, released in 1977 under the name Percy "Thrills" Thrillington. Turns out "Thrills" never really existed, and the album was really recorded by – you guessed it – Sir Paul himself. If you know anything more about “C’est Noel” or Les Intimes, I’d love to hear from you!

That's all for now . . . be back soon with thoughts on at least a couple of additional tracks.