It's a Big Weekend for Andy Cirzan Fans!

Around this time each year, the hosts of WBEZ-FM's nationally syndicated Sound Opinions show set aside an entire program to celebrate the season with their very own Kris Kringle, the one and only Andy Cirzan. By day, Cirzan is vice president of Jam Productions, one of the country's leading independent concert promoters. After hours, however, he becomes the jolly DJ LoFi, one of the country's preeminent collectors of offbeat and unusual Christmas music. This guy's been sending around dazzling holiday mixes for a good 20 years longer than I have, and they're chock full of delightful tunes you've almost certainly never heard before.

Andy's latest mix is called Space Age Santa Sounds, it's made up of the most interesting tracks from his 2001, 2002, 2003 and 2004 compilations, and it's available as a free download, below. You'll also find a link to Andy's annual Sound Opinions Holiday Extravaganza, which is trying something different this year. Rather than playing tracks from Andy's latest mix, this year's show offers a whole separate batch of slightly more mainstream holiday fare in a show they're calling "Rock 'n Pop Xmas." The show features Christmas music from The Beatles, The Kinks, The Band, Lou Reed and more, along with lively commentary from Andy and hosts Jim DeRogatis and Greg Kot, two of the sharpest and most insightful pop music writers in the nation. Be sure to grab both the latest Andy Cirzan mix and this weekend's Sound Opinions broadcast. And don't delay! Like Christmas, these treats won't last forever. 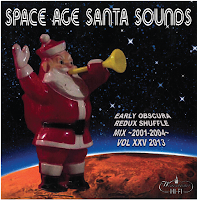