My latest holiday mix is called C'est Noel!,  and as in previous years, I'm currently sharing some background information and random thoughts about each of the individual tracks I've included. There are 35 tracks altogether, and we've looked at nine so far. We'll look at another three today, which still leaves plenty to write about between now and Christmas Day.

I hate to sound like a bitter old man, but there’s just no way today’s most popular music can hold a candle to the kind of stuff that was regularly being produced back in the 1960s and ‘70s. In those days, it was the Beatles, Bob Dylan and the Rolling Stones. Today it’s Miley Cyrus, Justin Bieber and Kanye West. OK, so maybe that’s not such a fair comparison, but answer me this: Which of today’s artists can come close the legendary Marvin Gaye? I’ve been a fan of this guy's music ever since I can remember. I love the feel-good innocence of his early Motown songs recorded under Berry Gordy’s direction, and the album he recorded with Diana Ross was one of the very first records I ever purchased. (I bought it on cassette, actually.) The lusciously sensual “I Want You” has to be among the most erotic songs ever recorded, while the infectious groove of “Got to Give It Up” sets old and young alike into motion, as demonstrated by the success of “Blurred Lines,” this year's biggest hit, which is based entirely on its compelling and distinctive beat. But the fullness of Gaye’s musical genius is best represented by the album made over Gordy’s strong objection, the brilliant and topical What’s Going On? To this day, it stands as the most accurate and detailed portrait ever made of Vietnam-era America.

Gaye didn’t record an awful lot of Christmas music in his lifetime. The best known of his holiday releases was probably “I Want to Come Home for Christmas,” which was released as a single in 1972 and later appeared on the compilation “A Motown Christmas” the following year. Written by Gaye and Forest Hairston, this incredibly beautiful and touching song is written from the point of view of a soldier serving in Vietnam. Amazingly, it never received much airplay until years after its release due to the allegedly sensitive nature of its subject.

“Purple Snowflakes” was written by Dave Hamilton and Clarence Paul and recorded by Gaye in 1964, but for some reason it remained in the vault until well after Gaye’s death. So far as I can tell, it was first released in 1993 on Motown’s “Christmas in the City” compilation. The Jackson 5 recorded the song in 1970 for their first Christmas album, but it didn’t make the cut. Gaye’s version has subsequently been included in a dozen or more different compilations, and it’s no longer so unusual to hear it in stores or on the radio. Of course, if I ran the world, this one would be played at least once an hour from Thanksgiving through New Year’s Day.

Track 11
Just a Sad Christmas, by The Soul Duo (1969)
As most of us know all too well, Christmas isn’t always merry and bright; the good cheer we celebrate too often masks sadness, loneliness and despair, as evidenced by the many hard luck stories that find their way into the holiday music bins. (Don’t believe me? Check out any of the little Christmas ditties by country western singer Red Sovine, like this one, for example.) One of the nice things about this track is that while it starts out on a decidedly sad note, by the time it ends the light of increasingly good times is illuminating the end of the tunnel. Another nice thing is that it’s just a damn fine piece of classic soul. 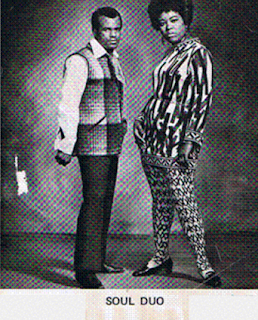 Sadly, this terrific tune is one of the few songs The Soul Duo recorded together. The act consisted of Little Ida (Ida Sands) and Little Daddy (Joe Webster from The Anglos). Their first single, “This Is Your Day," was recorded in 1969 for the Philadelphia-based Shiptown label and subsequently distributed nationally on Jamie Records. “Just a Sad Christmas” was the duo’s follow-up effort, and it was apparently a solid holiday hit in the mid-Atlantic area. And for good reason:

Ida and Joe turn in some amazingly deep vocals on this hard-hitting ballad with perfectly sympathetic backing from The Sounds Band (love that bluesy organ!). Definitely not your run-of-the-mill seasonal fluff, we think "Sad Xmas" deserves to be included amongst the classic soulful Holiday songs.

Funky Virginia Blog. I couldn’t agree more. Sadly, Ida Sands passed away earlier this year. Further details about her life and career, including clips, are available HERE.
Hear an alternate version of “Just a Sad Christmas” by the group Grillade HERE.


Track 10
Blue Christmas Lights, by Buck Owens (1965)
I can’t claim to be a big Buck Owens fan, or, for that matter, to know very much about country music at all. This song was recorded in 1965 for the album Christmas with Buck Owens and His Buckaroos, which appears to be one of several holiday records Owens released over his long and very successful career. I like this tune, and I thought it would be nice to include it next to a couple of soul tracks to illustrate just how well holiday music can bridge the various gaps between different styles of music and points of view.

We've now covered one-third of all of the tracks from this year's mix. Sooner or later, I'll be back with some thoughts on the next several cuts.
Posted by Mark J in LA at 6:34 AM