My annual holiday music mix for 2013 is called C'est Noel! – and I've been posting a little background information on each of the 35 tracks it contains. We've already covered the first six tracks. Today, we look at three more:

I grew up a long time ago, and while I try to keep up with certain aspects of popular culture, I'm the first to admit that there's lots I miss. When it comes to superheroes, for example, I'm still stuck in the '60s. I understand the franchise has expanded quite a bit since then, but mention Batman to me and I think primarily of the campy TV series that ran on ABC from 1966 through 1968. In the TV series, Adam West played Batman, Burt Ward played Robin, and the villains were played by a distinguished group that included Burgess Meredith (as The Penguin), Anne Baxter (as Zelda the Great), Art Carney (as The Archer) and Cliff Robertson (as Shame). And that's just the tip of the iceberg. The track I've included on C'est Noel! is from a 1966 episode featuring Andy Devine as Santa Claus. Here it is in video form:

Track 8
Holiday Greetings, by Adam West
The second celebrity greeting on this year's mix is from Adam West, who, as noted above, played the role of Batman and his alter ego, millionaire Bruce Wayne, in the ABC series Batman. While the series only ran for about three years, West was severely typecast as a result of the show, and it became difficult for him to find significant work in other projects once the series was cancelled. West is now 85 years old, if you can believe that, and in recent years, he's done considerable voice-over work, including a role in which he portrays himself after having been elected Mayor of Quahog, Rhode Island on the animated series The Family Guy. (I'm still beside myself over the producers' decision to kill off the family dog last week. Bastards.)

Track 7
Holiday Jangle, by The Found Sound Orchestra (2009)
This is another mysterious track about which I have very little to offer. I believe The Found Sound Orchestra (or “FSO”) was formed in Australia in or around 2008. The group released several albums of mashups during the next couple of years, including Christmas Midgets, a nine-song collection of holiday music that was rumored to have resulted from a collaboration with American comedian David Cross of Arrested Development fame. I downloaded Christmas Midgets from the group’s website in January 2011 based on the following promotional copy that appeared there at the time: 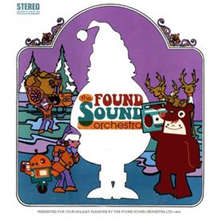 Girl Talk not got enough Christmas joy for you? Crappy old flea ridden junk shop Christmas albums lying around for another year? Sick of Mariah Carey warbling through another Christmas[?] Then tell your family and friends about Christmas Midgets, the new Christmas album by The Found Sound Orchestra. Disco flipping, bed bugging and reorchestrating over 100 of the best, the worst and the downright wrong Christmas records ever made.

So, throw away your copy of Enya’s Christmas album, delete Boney M’s ’Christmas with Boney M’ album from your music folder and let ‘Christmas Midgets’ replace ‘Phil Spectors Christmas Gift’ album as the soundtrack to your December.


Unfortunately, the group's website is gone now, and all we’ve got left is whatever copies were captured for posterity by the Internet Archive’s Wayback Machine. No matter. “Holiday Jangle” is still a great little tune, and some of the other tracks from the FSO’s premier holiday album can still be found on Soundcloud.

That's all for now. Back soon with more!