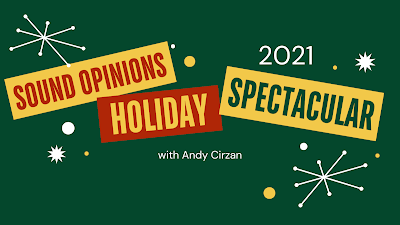 One of my annual holiday traditions is to piggyback on the longstanding holiday tradition of the fabulous Sound Opinions show and celebrate the holiday tradition of concert promoter Andy Cirzan (a/k/a DJ LoFi), who's been putting together one of the most widely-anticipated holiday compilations for more than 20 years. Sound Opinions is a weekly Chicago-based rock talk show broadcast for years on public radio station WBZE. Hosted by Jim DeRogatis and Greg Kot, it is now independently produced. Cirzan is the program's special guest each December for its annual holiday spectacular, featuring a wild mix of offbeat and largely overlooked holiday tunes from a wide variety of genres.
While it seems difficult to believe, I didn't know anything about Andy Cirzan or his incredible holiday compilations until several years after I started making my own. I say that not because mine offer anything close to the levels of quality and originality Andy achieves but rather because we seem to favor some of the same unusual qualities in our holiday music fare. I freely admit that I've cribbed off Andy's mixes rather generously over the years, and I'm grateful to him and so many other enthusiasts for introducing me to some of the terrific material out there.
This year's Sound Opinions Spectacular is another great one, featuring tracks from Cirzan's latest holiday compilation as well as a number of lesser known holiday hits, a batch of unbelievable vintage Korean psychedelic tunes, and a brief clip from an orchestral holiday piece created in the 1960s by Brian Wilson of the Beach Boys. You can enjoy the show by way of the widget below.
Posted by Mark J in LA at 4:01 PM