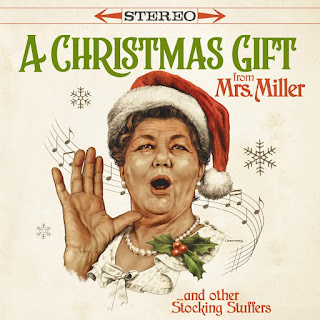 A lot of strange things took place in the 1960s, and among the strangest bits of pop cultural history was the discovery and modest success of musical artist Elva Ruby Miller, a Missouri native known to millions simply as "Mrs. Miller." Her popularity, such as it was, came not from any innate talents or musical knowledge, but rather for her shrill and off-tempo renditions of numerous pop classics. She was, in other words, so bad she was good — something we routinely celebrate in these parts, to which our 15+ years of holiday mixes will attest.
Mrs. Miller was discovered in the early 1960s by radio DJ Gary Owens, who later became semi-famous himself as the announcer for Rowan and Martin's Laugh-In. Her first album, playfully titled "Mrs. Miller's Greatest Hits," was released in 1966 on Capitol Records, selling over 250,000 copies within its first three weeks on the shelves. Her first single, "Downtown," actually made the Billboard singles chart. Subsequent albums included "Will Success Spoil Mrs. Miller," "The Country Soul of Mrs. Miller," and "Mrs. Miller Does Her Thing." Somehow along the way, however, this musical juggernaut ran out of gas and Mrs. Miller officially retired in 1973. She died at Garden Terrace Retirement Center, in Vista, California, in 1997, at the age of 89.
You might think that would have been the end of the Mrs. Miller story, but no. In fact, right in the middle of 2020, among the most challenging years in recent memory, the folks at Ship to Shore Records discovered a collection of holiday tunes recorded by Mrs. Miller but never released. Well, before you could say "Capitol Records," those same folks pulled together and released a "new" album of Mrs. Miller tunes called "A Christmas Gift from Mrs. Miller" — just when we needed them most.
This release includes eight holiday classics and eleven "stocking stuffers" — non-Christmas tunes that can brighten your days all year long. The whole album is a delight, but of the stocking stuffers I like the naughtiest ones the best:  "The Weekend of a Private Secretary," "I Said No," and "She Had to Go and Lose It at the Astor." Of course, I've got the holiday tunes on my frequently played list.
Listen to "Here Comes Santa Claus," by Mrs. Miller
Watch Mrs. Miller perform "Downtown" on the Merv Griffin Show
Track 22
Merry Christmas, Baby, Mae West (1966) 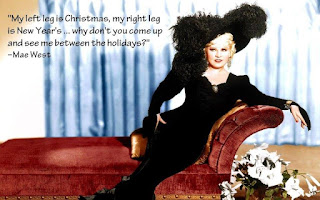 Mae West was big a little before my time (believe it or not), so she's not someone I think about very often. Moreover, she was born around the same time as my grandmother so listening to her bawdy comments feels a little too twisted, even for me. Of course, I'm certainly familiar with her album of holiday renditions, which was released in 1966 as "Wild Christmas" and subsequently repackaged in several versions, each with different covers. I have to say I don't enjoy her songs very much. I always get the uncomfortable sense that some fast-talking grifter talked her into humiliating herself so he could score a couple of quick bucks. Also, I'm not so keen about her obvious trolling for expensive gifts, which is especially apparent in "Put the Loot in the Boot," another West classic that I used in my special "Hooray for Santa Claus" mix in 2007.
"Merry Christmas Baby," is one of Bruce Springsteen's go-to Christmas songs. For my money, the Boss kicks Mae West's ass on this tune.
Listen to Merry Christmas Baby, by Mae West

Watch Bruce Springsteen Perform Merry Christmas Baby on the Conan O'Brien Show
Track 21
Free Christmas Ornaments from Ivory Snow, Procter & Gamble (1956)
I'm not sure there's too much to say about this one over and above what's in the clip itself. You may notice that the version I included on this year's mix is a little shorter than the original, as I've trimmed a few lines for the sake of brevity. I'm not sure many modern consumers would have the patience to save and submit their detergent boxtops in exchange for a cheap plastic ornament. I doubt whether many of today's  companies would want to mess with this sort of thing either. 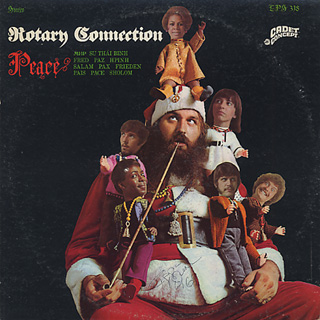 Rotary Connection is a Chicago-based band that was formed in 1966, played back-up for bluesman Muddy Waters and released several albums in the late '60s and early '70s. They've been described as a psychedelic blues band, and their 1968 album "Peace" is made up primarily of Christmas-themed tunes, two of which are included on this year's mix. The first of these is Santa's Little Helpers, which is a beautiful little clip with just one flaw — it's entirely too short!
I'll have a little more to offer on Rotary Connection down the road when we reach the final song on this year's mix. In the meantime, this clip goes out to all of those good folks who are out shopping today or supporting the work of anyone dressed in a Santa suit.
Listen to "Santa's Little Helper," by Rotary Connection
That's it for now, but I'll be back soon with more.
Posted by Mark J in LA at 7:12 PM