This blog was originally started to share some background about the various tracks on each of my annual holiday mixes. I've done a poor job of doing this in recent years, but this year I hope to provide at least some information about a number of this year's tracks. As in previous years, I'll be looking at the tracks a few at a time with each day's tracks in reverse order. No promises about posting thoughts on everything, but I'll do what I can. Let's start with some background on the first three items in the mix:
Track 3
Holiday Greetings from Gavin MacLeod (1986)

This was a rough year for folks like me who are fans of The Mary Tyler Moore Show, the classic CBS sitcom that won 29 Emmy awards during its seven-year run from 1970-77. As you'll recall, the show starred Mary Tyler Moore as Mary Richards, a 30-year-old single woman who takes a job in the WJM newsroom following the breakup of her engagement. It was pathbreaking hit as it was one of the first programs to feature an independent unmarried career woman in a leading role. Three of the show's principal actors, including Moore, left us before the start of this year, but 2021 claimed three additional stars:  Cloris Leachman, who played Mary's older friend Phyllis died in January at age 94; Ed Asner, who played Mary's boss, Lou Grant, died in August at age 91; and Gavin MacLeod, who played Mary's coworker Murray Slaughter, died this past May at age 90. MacLeod went on to star in The Love Boat, which ran from 1977-86, but I will always remember him as the sweet WJM news writer who sat next to Mary Richards for so many wonderful years.
Track 2
Wildest Christmas, The Rumbles LTD (1968) 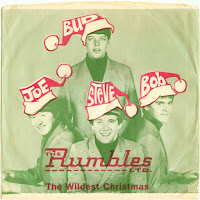 The second track from this year's mix is a song by The Rumbles LTD, a band that got its start in the early 1960s as a high school "garage band" in Council Bluffs, Iowa. Remarkably, the group has been making music ever since, and while there have been a number of personnel changes over the years, the band is still around today. The group enjoyed its greatest success in the mid-1960s with a string of danceable rock releases that included the 1967 hit "Jezebel," which propelled them to regional success in many parts of the Midwest. "Wildest Christmas" is a cute little number about a home improvement project gone wrong. It was released on a double-sided 45 with The Rumbles version of "Santa Claus Is Coming to Town," done in the style of Frankie Valli and the Four Seasons. Of the two, I like "Wildest Christmas" best.
Track 1
Be a Santa (from the Dean Martin Christmas Show) (1968)
I've never paid a whole lot of attention to the late Dean Martin until very recently. I knew he'd had a few hit records in the 1950s and '60s and used to do comedy with Jerry Lewis. I knew he was a member of the famous "Rat Pack" along with Frank Sinatra, Sammy Davis, Jr. and several others. What I remembered most about Martin is that he always seemed to be on TV when I was growing up. First, there were his weekly variety shows on NBC, which I believe were typically completed (rehearsals through taping) in a single day. Then there were the roasts, which struck me as smug, self-satisfied affairs featuring a bunch of folks I didn't recognize. Finally, there were the holiday specials, which I certainly recalled. In fact, included a promo for one of his Christmas specials on my 2011 holiday mix, Gee Whiz … It's Christmas. This fall, however, I stumbled across a video of the 1968 Dean Martin Christmas Show, and it somehow made a big impression on me. That's why I chose to start this year's mix off with the opening number from that TV special, "Be a Santa."
The song is from the Broadway musical "Subways Are for Sleeping," which was produced by David Merrick and opened at the St. James Theater in late 1961. The original show, which featured Orson Bean and newcomer Valerie Harper, ran for less than a year and barely broke even, and "Be a Santa" has never really caught on as a seasonal favorite. But Martin makes it work with a delightful opening in which his make-up team turns him into Santa followed by a group of similarly clad performers dancing and singing with him. The Martin show inserts several weak comic bits into the song that I've removed, but the number as a whole works pretty well as the kick-off to the overall program.
The balance of the program is about what you'd expect. Dean and his "girls" (known professionally as The Golddiggers sing a variety of seasonal tunes (including "Marshmallow World," long identified with Martin and Sinatra) interspersed with a number of comedy bits featuring such folks as Bob Hope, Bob Newhart and Dom DeLuise. But what sets this show apart is the last ten minutes, in which some of the era's biggest stars show up to list some of the children's hospitals and orphanages that would be receiving holiday toys from Dino and the gang to brighten Christmas morning for the less fortunate children of the country.
Dean Martin has enjoyed a reputation as the coolest of the cool cats, and from what I've learned of him in just the past couple of weeks I've developed a new-found respect for him both as an entertainer and a human being. I'm guessing his 1968 holiday special was probably just the sort of thing many Americans needed at the end of that traumatic and difficult year.
Check out the Complete 1968 Dean Martin Christmas Show
Watch Dean Martin Perform His 20 Funniest Duets
Posted by Mark J in LA at 2:15 PM

Email ThisBlogThis!Share to TwitterShare to FacebookShare to Pinterest
Labels: Be a Santa, Dean Martin, Gavin MacLeod, The Rumbles