Continuing with our review of the 37 tracks on this year's holiday mix, here's a look at the next batch of songs and clips: 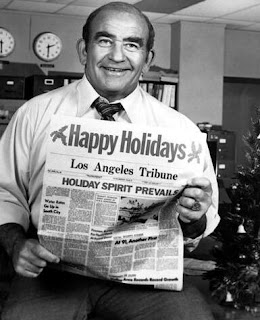 As noted earlier, we lost three stars of The Mary Tyler Moore Show this year:  Cloris Leachman, Gavin MacLeod, and one of my favorite celebrities of all time, the great Ed Asner. Asner, of course, played newsman Lou Grant two different TV series:  The Mary Tyler Moore Show (1970-77), half-hour sitcom based in a Minneapolis TV station; and Lou Grant (1977-82), a one-hour drama based in a Los Angeles-based daily newspaper. Asner won Emmys for his work on both series and others as well; in fact, he won more performance-based Emmys than any other male actor.

Asner was also known for his political activism and generous support of a wide range of charitable causes. In the early 1980s, he served two terms as president of the Screen Actors Guild, a job previously held by Republicans George Murphy and Ronald Reagan. During his tenure as SAG's president, Asner actively opposed President Reagan's policies in Central and South America while advocating for union members and the less fortunate in this country and elsewhere.

Upon learning of Asner's death, filmmaker and activist Michael Moore recalled as follows:

When I was making my first film, Roger & Me, I was broke, so I wrote to some famous people to ask for help. Only one responded: Ed Asner.
“I don’t know you, kid, but here’s 500 bucks,” said the note attached to the check. “Sounds like it’ll be a great film. I was an autoworker once.”

Asner loved to work, and he played hundreds of other characters in addition to his iconic Lou Grant role. Generations of children know him for voicing the role of widower Carl Fredricksen in Disney's animated film Up! I'm not sure if this was intentional or happenstance, but he had significant roles in at least a dozen popular Christmas movies, including the Emmy-winning 1977 TV film "The Gathering." Remarkably, he played Santa Claus himself in at least half a dozen movies and TV shows, including the hit film Elf (2003).
Asner remained active to the very end — in fact, he was posting tweets just a couple of days before he died this past August 29. Ed was a powerful presence in the world and we won't soon see his like again.

Watch Ed Asner in the Holiday Film "The Gathering" (1977)

Hear Ed Asner share some quick thoughts about the U.S. Constitution as "The Grumpy Historian"

When actor Jamie Farr was hired to appear on the new CBS TV series M*A*S*H in 1972 he was scheduled to appear in a single episode as Maxwell Klinger, a corporal who wore female clothing in the hope that he'd be discharged from the service as unfit for duty. The Klinger character proved popular, however, and Farr was asked back for several additional episodes until by the fourth season of the popular program he became a regular cast member.
M*A*S*H has always been one of my favorite shows, and while Klinger was never one of my favorite characters I've always thought that Jamie Farr seemed like an awfully good guy. Unfortunately, his work as Klinger seems to have permanently typecast him and he's had trouble landing other work. Believe it or not he's now 87 years old, and I know everyone will join me in extending him our warmest holiday wishes this year, too.
Track 29
Santa Claus Is Coming to Town, Arthur Treacher (1966) 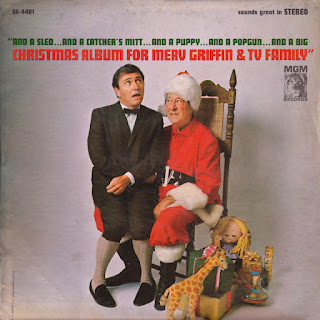 Arthur Treacher was an English stage and film actor best known for his portrayal of butlers Jeeves in a series of Shirley Temple movies and Constable Jones in the classic Disney film Mary Poppins. He's also known for his work as announcer and sidekick on the Merv Griffin Show from 1965-70. I guess what I remember him best for is the chain of fast food restaurants to which he lent his name starting in the late 1960s. Arthur Treacher's featured fried fish, fried chicken and chips (french fries), and at its peak the chain boasted more than 800 stores. Today, only one remains.
Treacher's version of "Santa Claus Is Coming to Town" was recorded as part of a holiday album released in 1966 by "Merv Griffin and his TV Family." The collection also included songs by Frankie Michaels, who had won a Tony Award earlier that year for his role in the Broadway show Mame; actor David Soul; Gilbert Price, operatic baritone and actor; and, of course, several by Griffin himself. This track was ultimately released as a single and selected by Billboard magazine as one of the standouts of the holiday releases that year. I don't know that I'd give it that much credit myself, but it's a cool little number and a good representative song from its time.
Track 28
Little Drummer Boy, William Hung (2004)
I'll likely be back tomorrow with some quick thoughts on one or more of the six remaining tracks on this year's mix.
Posted by Mark J in LA at 9:52 PM