Continuing our review of my latest holiday mix Be a Santa, here's some quick background on three additional tracks:

Track 9
Bring Me a Beatle for Christmas, Cindy Rella (1964)
Track 8
Christmas with The Beatles, Judy and the Duets (1964)
Tracks 8 and 9 are but two further examples of the breadth and depth of the effects of Beatlemania on American culture in 1964. While many no doubt recall the various holiday tracks the Beatles themselves recorded and circulated via their official fan club throughout the 1960s, what's less well remembered are the many holiday-themed novelty records that others produced about the supergroup. I've included several of these oddities in previous mixes and links to a couple of these earlier offerings appear below. Lucky for you, I've got two more crazed fan tributes on Be a Santa. 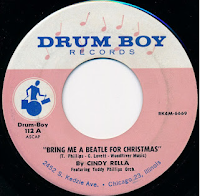 The first is by the cleverly named Cindy Rella (sorry, it wasn't my idea). From what little information there is about Ms. Rella, it seems she previously scored with several very minor hits including "I Want Him to Come Back Home" and "To Tommy with Love." For good or ill, this Beatles tribute appears to have ended her career.
This may just be me, but I had some trouble understanding some of the lyrics. Ms. Rella sings with a heavy accent, though it's hard to discern exactly where she's from. The lines I did understand were pretty much about exactly what you'd expect:

Bring me a Beatle for Christmas
Bring me a Beatle to love
Which one I don't care
Just as long as he's there
Paul is oh so handsome
When he smiles my heart skips a beat
The smart one is John
But he married a blonde
Ringo, George, John or Paul
Golly I like them all
If you don't bring me one
Christmas won't be any fun

"Christmas with The Beatles" is pretty much more of the same, although Judy and the Duets do not appear to have recorded any tunes other than this one and its flip side, "The Blind Boy."
I got a big charge out of watching the recent Beatles documentary Get Back, which, if you haven't seen it, I highly recommend. The talent and drive of these four guys is amazing and it's wonderful to see signs that their legacy will endure long after most of us are gone.
Listen to "Bring Me a Beatle for Christmas," by Cindy Rella
Listen to "Christmas with the Beatles," by Judy and the Duets
Listen to "Ringo Deer," by John Ferrier, from My 2016 Mix "Let It Snow"
Listen to "I Want a Beatle for Christmas," by Becky Lee Beck, from my 2014 Mix "Is There Really a Santa Claus"
Listen to "Ringo Bells," by Three Blind Mice, from my 2008 Mix "Home for the Holidays"
Track 7
Holiday Greetings from President Joe and Dr. Jill Biden (2020)
I'm going to avoid the temptation of a long political message in describing the seventh track on this year's mix other than to report it is an excerpt from remarks that were recorded last December before President Biden took office. The couple's complete statement appears below. Let me also just add that while I don't agree with everything the current administration has done and there are certain issues I'd like to receive additional attention, it's good to see a sincere a decent leader in the White House again as opposed to someone whose own self-interest and naked greed is the only standard for decision-making. Ho! Ho! Ho! and Merry Christmas to all!