Here's some background on another set of tracks from my latest holiday mix, Be a Santa, which was created to celebrate the 2021 holiday season.

Track 12
Everything's Gonna Be Cool This Christmas, Eels (2008)
If this song seems slightly familiar, you may recognize it from my 2006 mix, Stop Singing Those Dreadful Songs. I'm pretty sure this is the first time I've deliberately included a track I'd previously used in an earlier mix, and I did it for two reasons. First, this is a different and harder-edged version of this Eels holiday song, and I like this version a lot. Second, although the song's been around for years, it seems particularly topical and relevant this season. As near as I can tell, this version was produced a after the version I used in 2006 — possibly for the Useless Trinkets compilation released a couple of years later. But doesn't this sound about right for 2021:

Eels is a Los Angeles-based rock band formed in 1991 by singer/songwriter Mark Oliver Everett, who also goes by the stage name E. Everett's been rather prolific during the past 20 years, both as the leader of Eel and as a solo artist. Summarizing their stuff in any sort of meaningful way would require more experience with their music than I can claim, but I'm hoping you'll like this neat holiday release as much as I do.

Hear the Earlier Version of "Everything's Gonna Be Cool This Christmas"

Hear the version that appears on Be a Santa

One of the interesting facts you learn as a holiday music enthusiast is that the holiday music vaults are comprised of a surprisingly wide variety of styles and subgenres. For example, there's a significant number of beach and surfing-related holiday tunes and groups. I've featured at least a couple such tunes in earlier collections, including "Santa Claus Is Surfing to Town," by Soupy Sales, and "Christmas on the Beach," by Irene, from my 2009 mix, "I Just Can't Wait 'til Christmas," and there's another one this year. "Frosty's Beach Party" is by a group called The Barbary Coasters that was formed in San Francisco in the mid-1980s. Their music has a mid-'60s vibe and includes a number of surf-rock songs and tropical tunes. They also have a sizeable number of holiday tunes in their repertoire, including an entire album of seasonal numbers called "Hark," which is available on Amazon Music, below.
Hear "Frosty's Beach Party," by The Barbary Coasters
Check out "Hark" and Other Barbary Coasters albums on Amazon Music
Track 10
¿Dónde Está Santa Claus?, Augie Rios (1958) 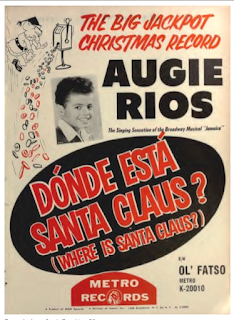 I'm guessing that nearly every song on this year's mix will be new to you. Sure, you've heard some of the songs before, but almost certainly not in the versions offered here. This song is the most likely exception, as it's more widely known both in this version and in several other popular versions, as noted below.  Written by George Scheck, Rod Parker, and Al Greiner, the song was first recorded by 12-year old Augie Rios and the Mark Jeffrey Orchestra in 1958 on the MGM Records' Metro label. Rios' parents were both born and raised in Puerto Rico but moved to New York shortly before Augie was born. He started acting at a young age and reportedly played on Broadway before recording this hit, which he subsequently performed on American Bandstand, the Patti Page Oldsmobile Show and numerous other variety programs. He later appeared on TV in the shows East Side/West Side and Naked City, each time playing a gang member.
In 1978, the song was covered by Charo, Spanish-born actress, television personality and former wife of bandleader Xavier Cugat. It was subsequently recorded in Spanish by Mexican TV host Chabelo and by El Vez and the rock group Guster.
Hear Augie Rios sing ¿Dónde Está Santa Claus?
Hear Charo singing her disco version of ¿Dónde Está Santa Claus?
Watch Charo sing Feliz Navidad while Pee Wee Herman breaks open a piñata
Posted by Mark J in LA at 6:54 AM