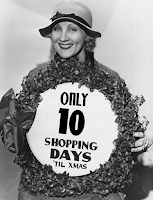 With only ten days left to go until Christmas, let's keep going with our summary review of the 37 tracks on my latest holiday mix, Be a Santa!
Track 19
I Feel It In My Bones, The Killers (2016)

Founded in Las Vegas in 2001, The Killers are among the most successful rock bands of the 21st century. Their latest album, Pressure Machine, released this past August, was their seventh consecutive Top 10 album in the United States, Comparisons to Bruce Springsteen have been common throughout the group's history and Springsteen's influence sounds especially strong throughout "Pressure Machine." Shortly before that album's release the group released a new version of their 2013 song "A Dustland Fairytale" featuring a guest appearance by the Boss.
Readers of this blog should know that the band is widely recognized for their practice of releasing a new holiday-themed single each year since 2006 to benefit Product Red, a group that supports The Global Fund to Combat AIDS, Tuberculosis and Malaria. "I Feel It In My Bones" was The Killers' holiday single for 2012 and I think it's one of their strongest Christmas offerings yet. In fact, it's probably my favorite track on my 2021 holiday mix. You can hear it in the clip below. What do you think?
Check Out the Official Music Video of "Dustland" by The Killers and Bruce Springsteen
Track 18
Beware All Ye Faithful, American Comedy Network (2002)
I'm honestly not sure where I found this clip, but I included it in this year's mix as a short bit of comic relief. As with most comedy, however, there's a kernel of truth in here. The holidays have always carried a certain amount of risk and danger. Be careful out there, friends!
Listen to "Beware All Ye Faithful"
Track 17
Jada's Christmas Song (Santa Claus' Helper), Jada with The Vise Squad (1975)
This little winner comes to us by way of WFMU's first 365Days Project in 2003. The project's chief aim was to collect and share a grab bag of offbeat aural experiences — one each day — reflecting the broad tapestry of the human experience. WFMU is a listener supported independent community radio station based in New York City, and for my money it offers the greatest collection of audio madness the world has ever known. The 365 Days Project is simply one particular slice of the madness. The daily offering throughout 2003 attracted enough attention to spur a second installment that featured daily selections throughout 2007.

Jada's Christmas Song was presented on March 31, 2003 along with the following explanation:

Johnny Mack Vise was an Anniston, Alabama radio hack and church choir director who inexplicably decided that his small children should be singers. This 45 RPM single to which this song provides the a-side is — to my knowledge — the only release by five-year old Jada Vinmarjay Vise (her middle name was a combination of the names of her three older Brothers — isn't that precious!). The contrast between the normal kid voices of the Vise Squad (the brothers) and Jada's otherworldly screech is sure to set any first-time listener's teeth on edge.

Listen to "Jada's Christmas Song (Santa Claus' Helper)," by Jada with the Vise Squad
Track 16
Indian Santa Claus, Lorene Mann (1969)
The final of today's four tracks is something I remember hearing as a kid and knowing even that it was objectionable. I had to think really hard before including it on this year's mix due to its unfortunate descriptions of Native Americans. I ultimately decided stuff like this should probably be exposed rather than hidden, but I offer it with some misgivings and my apologies.
This track was written and performed by Lorene Mann, a Tennessee native who settled in Nashville at the age of 19 to pursue a career in music. Signed by RCA Records in 1964, she went on to write for singers such as Kitty Wells and Skeeter Davis before launching a singing career of her own. Mann also tried her hand at acting, appearing in the 1975 Burt Reynolds vehicle “W.W. and the Dixie Dancekings.” But songwriting was apparently her first love, and she both co-founded the Nashville Songwriters Association International and in 2011 won the Maggie Cavender Award, in recognition of her “extraordinary service to the songwriting community.” I'll let you decide if it's warranted after you listen to the following tracks, all of which carry a warning that these are not for the weak of heart or stomach.
Listen to Lorene Mann Singing "Please Don't Take the Children from Me"
Listen to Lorene Mann Singing "Hide My Sin"
Posted by Mark J in LA at 7:53 PM